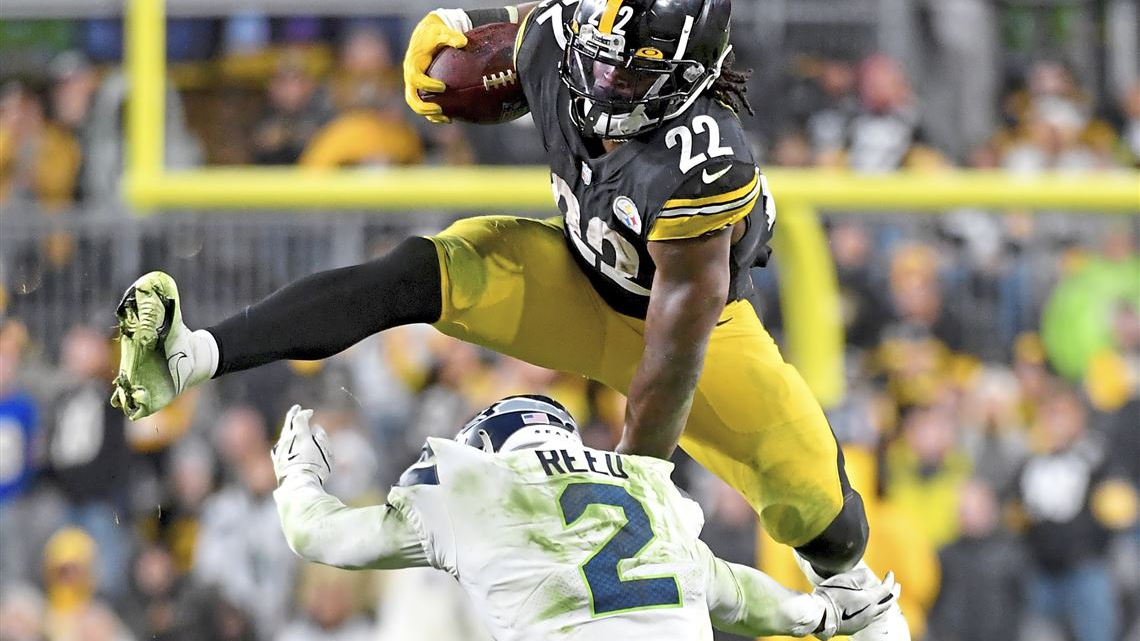 Yes, I know the 2021 season is still finishing up with playoffs, but fantasy wise, we are finished.  Either as Champions or as Donators to the champ’s winnings, and we’ve all been there at one time or another.  Just as the great Ricky Bobby often says, “If you ain’t first, you’re last!” and for tax purposes I will only say I went 2/6 this year in cash leagues.  Many in the fantasy community had their first-round picks blow up this season hmmmm CMC, or just flat out underperform, Zeke Elliott I’m looking in your direction, and in many other directions.

Derrick Henry was well under way to heading for 2000 yards at his bulldozing pace, and we lost him in Week #8 versus their division rival Indianapolis Colts.  Henry may be back for the playoffs as I’ve read today, that he is ready to start practicing, after injuring his foot, and having gone through surgery.  We shall see, but let’s look ahead to next season, where all of our dream teams get built and the reality that many will be hurt and gone for the year have not set in yet.

These are just my predictions in reverse order, and a few thoughts on each before next seasons schedules are released and draft and free agency have not yet affected teams that these players are on, or teams’ players could be going to.

10) Davante Adams - WR/Green Bay:  If I knew what was going on in Aaron Rodgers head, Davante would be WR number one on my board, and most likely will anyway, but Rodgers is one key to Adams flat out dominance.  He is also a Back-to-Back Champion in my Loser Lions Lovers League as a part of my championship teams and a huge reason why I've won it back to back.  If you land Adams here at the 10/11 or 10/14 turns consider yourself off to a great start. 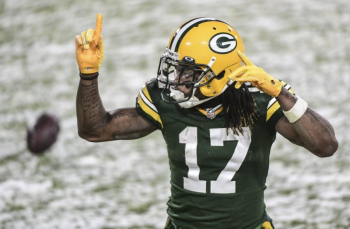 9) Justin Jefferson - WR/Minnesota: Currently sitting second in receiving yardage and fourth in receptions with one game remaining, and only in his second year!  Remember when the buzz was all about third year WR's?  Well next year is his third year, what will he do as an encore with Adam Thielan getting more fragile each year, Dalvin Cook unable to play a whole season without at least three games off injured, and Kirk Cousins sporadic performances prior to this seasons seven picks?   Jefferson is the straw stirring this downfield drink in the Twin-Cities and has made a fan out of this Lions/Chargers lover.

8) Joe Mixon - RB/Cincinnati: Over 1200 yards and 13 touchdowns, over 40 receptions and most importantly to fantasy minds, he's managed to play the entire season.  Just coming into his prime years in one of the morphing potent offenses in recent history, Mixon has a chance to really pile up the rushing stats, while the defenses worry about what WR is going to be the flavor of the week and go off for 150 yards and two touchdowns.  Mixon was dinged up a little bit this year, but managed to play and knowing one of your horses, picked to carry your teams is out there and producing is a huge sigh of relief each week.  This is my brother Dan's favorite team and we're going to see them next season.  A side note for all non-Lions fans, every Lions fan has another team to cheer for and love, just so we too can experience winning in the NFL, Mine is the Chargers. 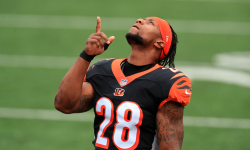 The Bengals. We're Moving on Up!

7) Dalvin Cook - RB/Minnesota: Even after that absolute crap performance in week 17 that I'm still vomiting up nine attempts and 13 yards, and his total lack of touchdowns, six; I still have a great feeling about Cook going into next season with another potent offense.  Dalvin has gotten over 1000 yards this year, and had so far pulled in 33 receptions with a game left.  His durability has always kept me reluctant to take him or overbid on him in drafts, and if he plays an entire season, it will be his first.  I still love his ability, his age is coming into his prime, his team can score, and be sure to draft Mattison a few rounds earlier to cover your butts.

6) Tyreek Hill - WR/Kansas City: As long as Mahomes is steering this ship, Hill and Travis Kelce will be top 20 picks simply due to volume, and the fact the NFL hasn't quite figured them out yet.  Tyreek has speed for days, weeks, and months, and is currently sitting third in receptions with 103 and seventh in yardage, and this is a down year in my eyes for he and Kelce.  It doesn't matter, they are still as deadly as a black mamba in your pillowcase, and to even take one play off will result in your cornerbacks getting third degree burns and the rest of the defense staring at Hills ass and wondering what the hell just happened.  Hill is in my Top-10, even after his scumbag of the year move of punching a five year old son in the chest awhile back, jerk-off. Take a swing at me tough guy!

5) Cooper Kupp - WR/Los Angeles Rams: Everyone knows many Top-10 picks fail to repeat the following season, and as of right now, this Kupp runneth over, and thank you Matthew Stafford.  Can this kind of performance carry over to next season?  Kupp was doing all this while Robert Woods was healthy and there were still plenty of looks for go around, and even after Woods when down and ODBJr. was brought in, and is slowly learning what winning feels like, it's still Cooper and the others.  I pre-season picked Stafford as my MVP, and Kupp is certainly helping his cause, and because this is the Way To Early Draft, Kupp is my second WR off the board, and also because he's like MC Hammer, 2 Legit baby!

4) Ja'maar Chase - WR/Cincinnati: This may be a biased call because of the huge game he had versus Kansas City, and the dozen or so all year, but until Joe Burrow's arm falls off, Chase is the man.  Could this be the next great QB/WR tandem, oh hell yes my friend.  I was hoping the Lions would get Chase, but we're in continual rebuild and O-Line seems to be our flavor of the month, just like WR was when that walking idiot Matt Millen was GM!  I just puked in my mouth at that thought of his name, worst thing ever for the Lions, and that list is longer than Wilt's list of ladies he's banged!  Ja'maar Chase has taken the league by storm and if there is one draft next year where he falls out of the top six picks, shoot everyone at that draft, he's as close to Rice, Moss, Owens that's I've seen in a long time. 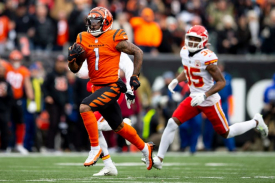 3) Najee Harris - RB/Pittsburgh: With the Steelers limping into the playoffs, and Big Ben just plain limping all over, the leadership of this team will be handed off to Harris, not Franco but Najee.  Regardless who is under center in the Steel City next fall, the man standing behind him will be this guy, and he will continue to pile up the numbers.  Plenty of talent on the outside, and the star attraction, Harris finished this 2021 regular season with 1200 yards on 307 carries, it is so nice to know there are still a few teams who do not have to drive us insane with their RRBC - BS!  Najee could very well be the top or second pick off the board depending on your taste, and also what we see out of Derrick Henry in these playoff games, will also help determine the draft order, because we all know in August of 2022 every single player in the NFL will be in the "Best Shape of his life"...vomit!

2) Derrick Henry - RB/Tennessee: The big man was well under way to a very special season before a foot injury stopped that, and we are left contemplating the ifs.  I don't wanna hear about no ifs Henry, I wanna hear you go into that stadium Derrick, chill those fools out, because I'm sending the best Derrick Henry yet into the game!

Shoot Henry, that's all you needed to say...

If he comes back like before the injury, Henry will be a top three pick next season, and should be regardless.  Unless he chops his own foot off or something insane.  He is a special player that only comes along every 25 years or so, let's enjoy this man play.

1) Jonathan Taylor - RB/Indianapolis:  He may have laid an egg in week 18, but he carried me in the Fighting Chance Fantasy Dynasty Draft, and will for years to come.  20 touchdowns this season, in a tie with Austin Ekeler, but unlike Eck, JT did all his damage between the tackles.  Taylor put up 1811 rushing yards, 18 rushing TD's on 332 carries, along with 40 receptions for 360 yards with two more touchdowns and has established himself as the Bell-Cow in the NFL.  JT only coughed the ball up four times all year and lost only two of those, so I know who I'm getting as many shares as possible next season if I decide to continue to play fantasy football.

On the outs with me are Christian McCaffery, who cannot stay healthy, Ezekiel Elliott, who did hit 1000 yards, but not for the prices he was going for and the continued presence of Tony Pollard.  I also was not feeling all the QB love for next year either, the point differential between the first and 12th QB isn't that large and deals can be found everywhere, but you need that lead RB.

Austin Ekeler just missed making my Top-10 along with Nick Chubb, Aaron Jones and his frail ass, and the trio of Tight Ends, Kelce, Andrews and Kittle will all be in the second ten in most snake drafts.