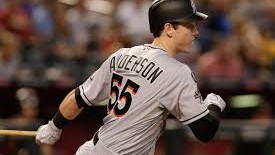 The first week and a half of the fantasy baseball season is just finishing, and as usual it was full of surprises. My advice to everyone this early is PLEASE don’t freak out. If a guy you drafted in the first ten to twelve rounds isn’t performing, just stay patient. However, if you suffered injuries, and there were plenty, or are really freaking out about someone, here are a handful of options that I think can help you right away.

Tyler Mahle, Cincinnati Reds. A seventh round pick of the Reds in 2013, Mahle seemed to have very little trouble throughout his time in the Minor Leagues with a career ERA under 3.00. He isn’t a dominating strikeout pitcher, but Mahle certainly gets his fair share of whiffs, and plenty enough to keep you happy. He shut the Cubs out over six innings with seven whiffs his first time out this year. I have grabbed him on a couple of my teams and you should consider the same.

Brian Anderson, Miami Marlins. While his start was overshadowed by Matt Davidson in Chicago, Anderson is also off to a nice beginning. He has a hit in every game this season so far, he is hitting .321, has driven in six runs already, and has walked more than he has struck out. Even crappy teams score runs, and someone has to drive them in for the Marlins. I like Anderson to be a good source of everything but steals and is a fine waiver add to start the year.

Reynaldo Lopez, Chicago White Sox. Lopez has a very bright future ahead of him it seems, it is just a matter of time of when that starts. The big knock on him is the thing that hurts a lot of young pitchers (*cough*Blake Snell*cough*), and that is walking too many batters. Well, he walked just two in six innings in his first outing against the Blue Jays where he didn’t win, but pitched very well. Lopez has the chance to disappoint you, but if he can keep the momentum going from his first outing he could be a boost to your pitching staff. Mitch Haniger is gotten off to a good start, and could be added from your waiver wires

Mitch Haniger, Seattle Mariners. Throughout his Minor League career, Haniger seemed to show a little more power each season. When he finally got a real shot for the Mariners last season, he was impressive at times with 16 homers in just 369 at-bats. His strikeout numbers aren’t ridiculous and he seems to have an every day job in right field. He is off to a solid start with two home runs and a .333 average to begin 2018. Obviously that average can’t keep up, but I think Haniger can be a consistent performer if he can stay healthy.

Keona Kela, Texas Rangers. Need saves? Kela is your guy on the wire. He has saved two games for the Rangers so far this year and has shown good strikeout ability in the past. Now, if he can just stay healthy.

Matt Harvey, New York Mets. If you are expecting the dominant Matt Harvey before all of his injuries and surgeries, you are likely to be disappointed. The “Dark Knight”, which was ridiculous anyway, ain’t coming back. However, now two years removed from major surgery, Harvey looks to be fully healthy for the first time in a while. He threw five shutout innings, while allowing just one hit and five strikeouts in his first outing. Sure it was against the Phillies, but he also had a solid Spring Training. I think Harvey still has the skills to be a viable fantasy pitcher, and definitely belongs on rosters across the board.

Josh Hader, Milwaukee Brewers. Even before Corey Knebel’s injury, I thought Hader should be on most fantasy teams. Even if he didn’t get steals, his strikeout ability is extremely strong. With Knebel due to miss at least six weeks, Hader has a chance to pick up some save chances. He doesn’t seem to be the popular choice among fantasy experts, but even if he doesn’t get saves he still has plenty of value.

Joey Lucchesi, San Diego Padres. He breezed through the Minors in a couple of years and showed some dominating strikeout stuff. And while his first start didn’t exactly move the needle, his second against the Rockies got people’s attention. He may have walked three in five innings, but he didn’t give up a run and struck out seven against a great offense. There is some risk involved with a young guy who hasn’t spent much time in the Majors, but Lucchesi has the chance to be a very nice early season pickup.