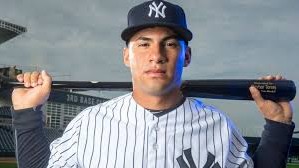 Another week has passed, and hopefully your fantasy team is on the right side of another matchup. However, as always with injuries and general suckiness, the waiver wire is always your friend. We start with a huge highlight on one of the top prospects in baseball getting the ball, but we have plenty of other goodies no matter what you need. So, let’s get right to it. As always please follow me on Twitter @fightingchance and hit me up with any questions you might have.

Gleyber Torres, 2B, New York Yankees. The Yankees top prospect, and one young player that many were hoping for since the beginning of the season is getting the call to the Bronx for Sunday. Torres is one of the more dynamic players in the Minors. He had Tommy John Surgery last year, but it clearly is having no impact on his play this year. Now, Torres isn’t a huge masher, so don’t expect him to come to the Majors and bomb 30 homers. However, a good batting average, a total in the mid to high teens in homers, and 20+ stolen bases is what you can expect. He is shortstop eligible in most leagues, but will play a lot of second base for the Yanks so the dual eligibility is another nice find. Go get him today or he will be gone tomorrow.

C.J. Cron, 1B, Tampa Bay Rays. Don't look now, but in the last week or so, Cron has really started to wake up. Dealt to the Rays before the season started, Cron has always shown some pretty decent pop, just hadn't had the right opportunity for every day playing time with the Angels. He has two hits in four of his last five games, including a two homer game on Saturday. If you are looking for a little power, give Cron a chance.

Teoscar Hernandez, OF, Toronto Blue Jays. He was a name that folks talked about as a waiver add last week, but I was a skeptical believer. However, watching him play this week now has me more on the bandwagon, and he is still owned in less than 50% of leagues. Hernandez is another nice speed/power combo guy with more emphasis on the speed. He could be someone who steals 30 bases, and while I don’t think he will quite get to 20 homers, he could get close. Randal Grichuk isn’t really working out in Toronto and that is giving Teoscar all of the opportunity he needs to play regularly right now. Mallex Smith is certainly getting on base early in the season, and the stolen base numbers should just grow from there.

Mallex Smith, OF, Tampa Bay Rays.  This is a guy that Steve and I identified as a guy to target in later rounds for speed, and while he only has three stolen bases so far, his batting average has been better than I expected it to be. There is absolutely no pressure on the Rays because they suck, so Smith should get the green light for pretty much whatever. I expect his stolen base numbers to start to rise and you should jump on him now.

Tyler O’Neill, OF, St. Louis Cardinals. One of the top prospects in the Cardinals organization, O’Neill was called up to start the weekend. He has a great power stroke, and the hope is one day that he will be a 30 homer a year kind of guy. I have to say though, that I am concerned about his playing time. Tommy Pham is nursing an injury, but Harrison Bader has been getting the start and Marcell Ozuna and Dexter Fowler have been pretty set at the other outfield spots. Will O’Neill get enough playing time? Personally, I think he should be playing over Fowler, but I don’t see that happening. If you make the move on O’Neill there’s a decent chance he won’t be playing very much. However, if he does work himself into a regular role somehow, he could be great.

Chris Stratton, SP, San Francisco Giants. With the injuries to Jeff Samardzija and Madison Bumgarner to start the season, Stratton got a shot in the rotation and he has made the most of it. In four starts this season, he has given up a combined six earned runs, and while he needs to bring his walk total down, he has been solid. It is the free passes that could define his season. In two starts he has zero walks, and in his other two starts he has walked a total of seven. He isn’t an elite strikeout pitcher by any means, but if he can be more consistent in the strike zone he could have a nice season as an end of the rotation guy on your fantasy team. Folty has been up and down throughout his career, but he is on fire right now and is worth the gamble.

Mike Foltynewicz, SP, Atlanta Braves. Every year I hate writing about this guy because I don’t like to try to spell out his last name. So, I’m just gonna shorten it to Folty. Every year this guy shows some flashes of talent, and every year he just isn’t quite consistent enough to get a lot of love in fantasy baseball. His ERA lately has always hovered somewhere in the 4.00s and I get that it isn’t something to get all giddy about. He hasn’t allowed more than two earned runs so far this year, and he has 26 Ks in 21 innings, so right now I suggest riding the hot hand while its hot.

Tyson Ross, SP, San Diego Padres. I am very skeptically adding Ross to this list. I wanted to believe in him last year, but I’ll just cite his 7.71 ERA in 2017 and move on from there. However, I am remembering 2013-2015 when he was actually a quality pitcher and it is making me hope that he is now just fully healthy and ready to be solid again. He took a no-hitter into the 8th in his last start, and hoping that the 127 pitches he threw doesn’t negatively impact him going forward. I might do it holding my nose a little, but Ross might be a solid addition to your fantasy rotation.

Bud Norris, RP, St. Louis Cardinals. I know the Cardinals signed Greg Holland to a $14 million contract presumably to be their closer, but things haven’t exactly gone his way so far. Enter Bud Norris, who did the same thing last year with the Angels where he stole the closer job and ran with it for a long time. Norris might not be the answer all season long, but if you are in need of saves now, he might not be a bad addition for as long as it lasts. He has five saves already, and his last four appearances have been save chances that he has converted.