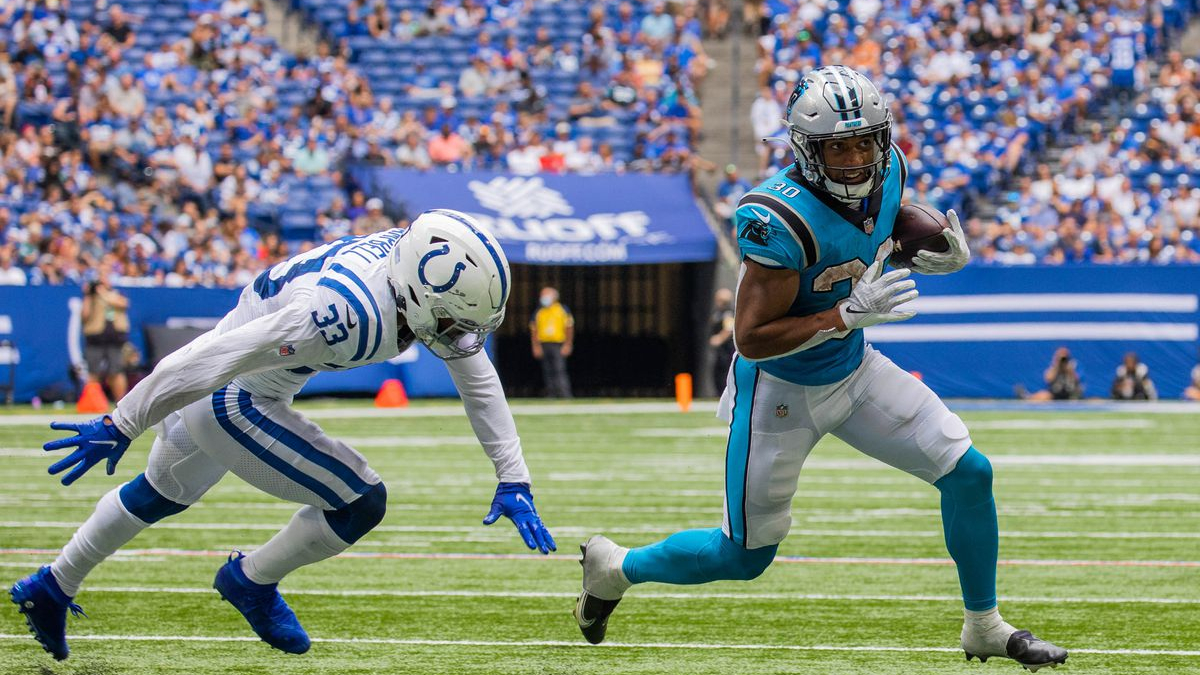 Injuries are starting to pile up and take their toll on the beloved game of fantasy football. As we’ve become used to, finding players to cover for injuries or to step in for underperforming players becomes more important with each passing week. As always, the best and easiest way to shore up rosters or put them over the top is working that waiver wire. There are still plenty of guys worth adding from the free-agent pool, and you will find my top waiver adds of the week below.

Sam Darnold is off to a great start as a Carolina Panther. He has now thrown for 279, 305, and 304 yards in their first three games of the season. Darnold has also thrown for three and ran for three touchdowns while only throwing one interception and losing one fumble. While not great, a six to two turnover ratio is much better than we’ve seen from Darnold in the past. Some players just need a change of scenery, and Darnold appears to be one of those guys. Of course, the extremely talented roster of the Panthers greatly helps, but Darnold is noticeably better than he was as a New York Jet.

The @Panthers #KeepPounding to 3-0. pic.twitter.com/uCqBHOvfUi

The Denver Broncos are off to a hot start, and Teddy Bridgewater deserves a lot of credit. It was a bit of a down week against the Jets, but he just didn’t need to do much as the Denver defense didn’t allow any points this past Sunday. Before this week, Bridgewater had two 20+ point outings and is looking sharp to start the 2021 season. He is a great addition if your team needs help at Quarterback.

Teddy Bridgewater has been an absolute STUD for the Broncos.

Christian McCaffrey, CMC, tweaked a hamstring and is now believed to be out for a few weeks. As we saw on Thursday, Chuba Hubbard will be the go-to running back for the Carolina Panthers. Hubbard saw 11 carries and five targets after CMC left the game against the Houston Texans. It's clear Hubbard will get a healthy workload while CMC heals up. Hubbard is the top waiver add overall this week as he is now an RB2 with RB1 upside.

Yes, another backup running back. Still, Alexander Mattison should be a priority add if he’s available in your league as we saw how valuable he is when Dalvin Cook misses time. He is only available in a little over 30% of leagues, but it’s definitely worth checking. It’s a very similar story as Chuba Hubbard for Mattison. He is an RB2 with RB1 upside any time that Cook misses time.

This Arizona Cardinals offense is a lot of fun! Kyler Murray has been playing at an MVP level and should lead the Cardinals to plenty of wins this year. The main beneficiary of this high-caliber offense is wide receiver, Christian Kirk. There has been a lot of hype and hope for Kirk over the past few years, but he has been unable to live up to expectations, until now. Kirk is having a great season so far as he now has 15 catches for 239 yards and two touchdowns through three games. There are a handful of good receivers that deserve some targets in Arizona, but it appears the Cardinals will be throwing enough to maintain the production we’ve seen through three weeks. Kirk is a WR2 that is available in almost half of Yahoo leagues and over 75% of ESPN leagues. He is a must-add and can be started at a wide receiver slot immediately.

Top wide receiver grades in the NFL this season, per PFF:

Even at 34 years old, Emmanuel Sanders is showing that he is still a solid NFL wide receiver. He has been working as the Bills’ WR2 and has been getting plenty of targets. It all came together for him in Week 3 as he scored over 20 fantasy points. I expect Sanders to continue having good fantasy days due to the Bills’ extremely pass-heavy offense and Sanders showing that he is still a capable player.

What a catch by Emmanuel Sanders

Talk about a welcomed sight! A.J. Green hasn’t gone off for over 100 receiving yards since Week 5 of the 2018 NFL season, but we finally saw it again this past week. This may not be the last time we see this in 2021 too. Green is playing around 80% of the Bengals’ offensive snaps, and now has 6 targets in all three games. He now has scored 10+ points the past two weeks and is a solid WR3/Flex play.

Just throw it up to AJ Green. #RedSea

Dawson Knox has had a nice start to the fantasy season. He’s now scored eight or more fantasy points all three weeks. It would be great to see his targets go up, but it’s hard to complain about solid production at the Tight End position. This Bills team passes a lot, and Knox should be relevant most weeks as a result.

This is surprising. Dawson Knox is the TE6 through 3 weeks. pic.twitter.com/I4eFRQIigl

Mainly a blocking Tight End, Tyler Conklin is showing that he is capable as a receiver too. After a slow start to the season, Conklin went off for 70 yards and a touchdown against Seattle on Sunday. Irv Smith is likely out for the season, and Conklin should continue playing 70% or more of the Vikings' offensive snaps as a result. I wouldn’t expect a major fantasy impact from Conklin, but he is a nice streaming option depending on the matchup.

Kirk Cousins was on fire for the opening drive as the Vikings tied things up with a 7-yard touchdown to TE Tyler Conklin and @PAonTheMic was PUMPED! Hear the call here... #KFANvikes #SKOL pic.twitter.com/zGj5NTbZDe