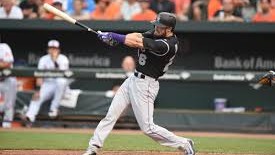 Waiver wire blah, blah, blah, article intro, let’s just get to the important stuff! Also please be sure to look back at previous articles for guys who are still under 50% owned. Find me on Twitter @fightingchance and email ryan@fightingchancefantasy.com with questions.

David Dahl, OF, Colorado Rockies. He has yet to hit a home run, but Dahl certainly has the capabilities to hit 25 in a season. He got an opportunity with Carlos Gonzalez going down with an injury, and even when CarGo comes back, I believe Dahl will take at-bats away from Gerardo Parra. He has the chance to be a special hitter and if he is available on your waiver wire he is definitely worth the pickup.

Leonys Martin, OF, Detroit Tigers. While he hasn’t hit for a good average in a few years, Martin hit a career high 15 home runs in 2017. He has always been a pretty good base stealer, and has stolen 24+ in the last three seasons he has been healthy. Martin could be a nice pickup if you are in need of speed, and he will throw in a nice dozen homers or so as well. The Tigers are going nowhere and should give Martin the green light to swing away at the plate and run when he is on the basepaths. Not too many hitters are hotter than Brandon Belt right now!

Brandon Belt, 1B, San Francisco Giants. Belt has been on fire in the last couple weeks. He had a stretch where he homered in four straight games and five out of six, and he also has a hit in 11 straight games going into Sunday. At 30 years old Belt is no longer a prospect or a young player on the rise. He has never had 20 home runs in a season, his batting average has only been over .280 once, but he is on a hot streak and it might not be dumb to ride it while he is hot even if it doesn’t last all year.

Jose Bautista, 3B, Atlanta Braves. When Bautista finally signed a minor league deal with the Braves, it didn’t seem to move the needle much for most fantasy players. However, there is word now that Bautista will be the Braves starting third baseman once he has spent enough time in the Minors where he has his timing back. Will you trust a late 30s player who no team thought high enough to sign until the middle of April? I can’t say that I am running to the waiver wire for him, but in the right situation, or in deeper leagues I can see a scenario where I might add Bautista.

Walker Buehler, Los Angeles Dodgers. One of the Dodgers top prospects, has looked great in the two starts that he has been given. It seems like Rich Hill will be back eventually, and that might send Buehler back to the Minors for more than a few days. However, Hill isn’t that good and he’s always hurt, I don’t trust that Ryu can stay healthy or continue to pitch this well, and Kenta Maeda is just all right. Even if Buehler is in the Minors for a few weeks he is worth adding and stashing.

Eduardo Rodriguez, SP, Boston Red Sox. He is owned in about 40% of leagues, but he has pitched pretty well so far. Rodriguez hasn’t allowed more than three runs in any of his four starts, although his walk numbers have been a little high. Rodriguez is a decent strikeout pitcher, but he is far from elite. With the Red Sox potent offense I can see Rodriguez continuing to win games, and to be a nice member of the end of your fantasy rotation. After a rough start, Mahle has turned it around and could be a valuable fantasy asset

Tyler Mahle, SP, Cincinnati Reds. A popular waiver pickup in the beginning of the year, Mahle had two disastrous starts that saw him sent to many waiver wires. But this is why we preach patience sometimes. He has three straight pretty good starts, in which he has allowed just six earned runs in his last 17 innings with 24 strikeouts. The Reds aren’t a great team, but I still think this kid has a bright future ahead of him.

Joakim Soria, RP, Chicago White Sox. For a while it looked like Nate Jones might take the closers job from Soria in Chicago, but Soria has saved the last two games he has come into. He is aging, he isn’t a fireballer, won’t rack up strikeouts, and the White Sox aren’t that good. However, he is a closer, and he has been a pretty proficient closer in his time. I just picked him up in a league I had Brad Brach, so if you are in a similar situation you can do worse than Soria.