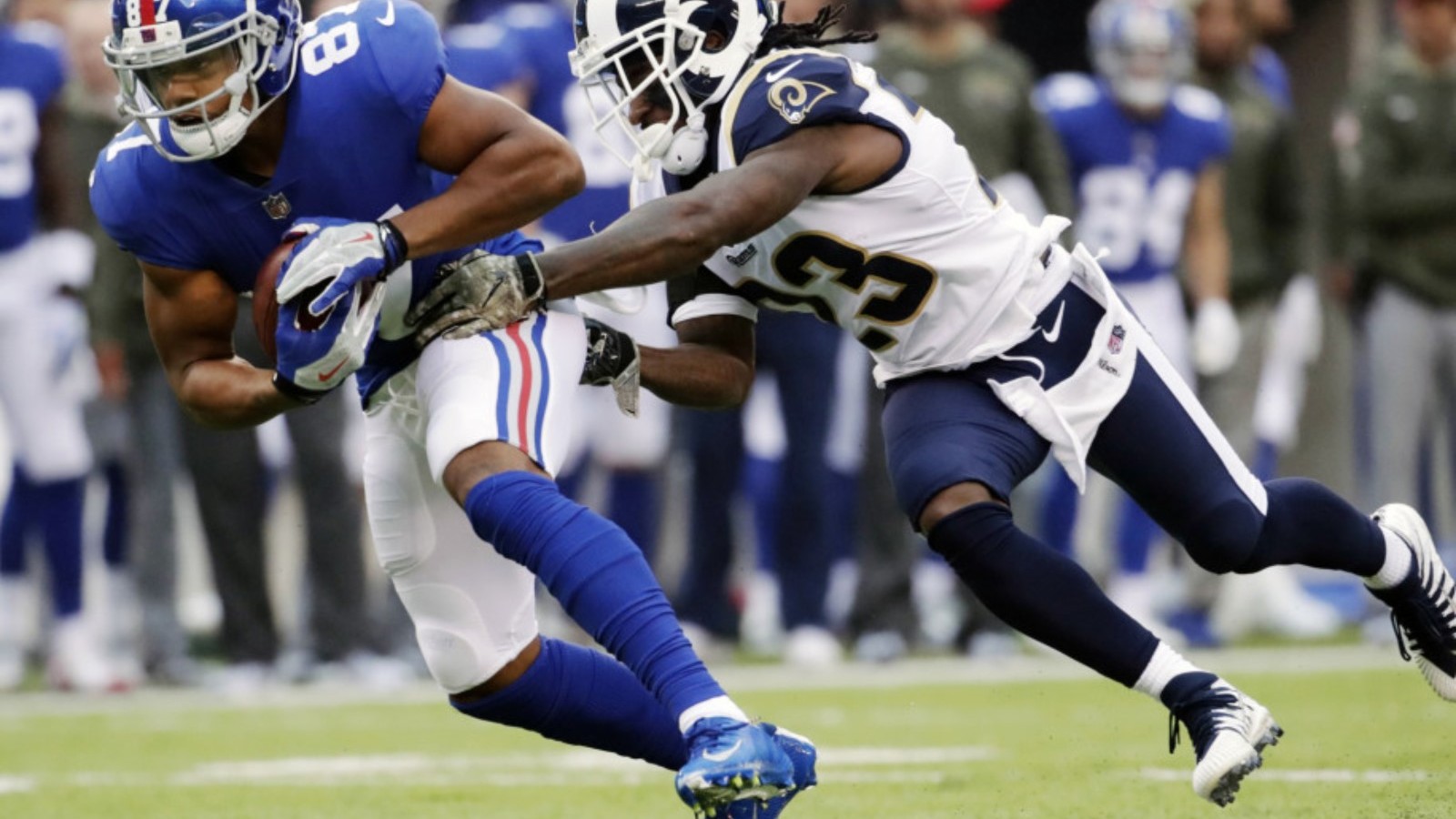 Welcome to the Fighting Chance Roundtable! Each week we will be asking our panel of Fighting Chance Staff a series of questions for the upcoming slate of NFL games. Each person will give you the best answer to the question in order to help set your lineups this week, both season long and DFS. This week we have Steve Rapin (@fantasygeek37 on Twitter), Jim Day (@fantasytaz), Kacey Kasem (@thekaceykasem), Brian Drake (@drakefantasy), and myself, Ryan Hallam (@fightingchance). Please dear reader, enjoy the Week 1 Roundtable!

Steve’s Pick - Sterling Shepard, New York Giants. With Jalen Ramsey likely to be locking horns with Odell Beckham and the Jags also boasting a solid rush defense which could give Saquon Barkley fits, I think the Giants will attack the middle of the field early and often. Sterling Shepard has the most favorable matchup as he should see a lot of slot corner, DJ Hayden, and that should allow him to see nice production in Week 1.

Jim’s Pick - Donte Moncrief, Jacksonville Jaguars. Most are all over Keelan Cole, but Moncrief will be starting on the other side and until the Giants' defense can show they can stop anyone you have t ride the wave. Add in that Olivier Vernon, the Giants best pass rusher and it should be all guns blazing for Blake Bortles.

Kacey’s Pick - Tyler Eifert, Cincinnati Bengals. Hey guys, guess what? Tyler Eifert is officially listed as healthy. Should play him while you can, and up against the Colts defense that was so bad at defending the middle of the field last year, he should have a great game.

Brian’s Pick - Quincy Enunwa, New York Jets. I’m all in on this guy. He’ll own the middle of the field for a team without a viable TE.

Ryan’s Pick – Dede Westbrook, Jacksonville Jaguars. Janoris Jenkins will likely be guarding Keelan Cole and the rest of the Giants secondary is hot garbage. Westbrook can fly and I can see him having a great opening game on Sunday.

Steve’s Pick - Amari Cooper, Los Angeles Raiders. Amari Cooper will be seeing a lot of either Aqib Talib or Marcus Peters and to put it bluntly, he’s sucked ass against both of them in the past. The Rams have put together one of the best defenses in the league and I’m not sure we will even see the Raiders hit double digit points on Monday night.

Jim’s Pick - Peyton Barber, Tampa Bay Buccaneers. New Orleans should get out to an early lead which will cause TB to go away from the run early and use Jacquizz Rodgers as a passing down back. Barber will need a TD to return value in Week 1.

Kacey’s Pick - Jimmy Garoppolo, San Francisco 49ers. Sorry Jimmy GQ fans, I don't think week one will be favorable for him. He'll be playing a tough Vikings defense in their home, so I see issues here.

Brian’s Pick - Saquon Barkley, New York Giants.  Basically anyone on the Giants is screwed this week vs Jacksonville. If he gets 70 yards total I’d be shocked.

Ryan’s Pick – Jimmy Garoppolo, San Francisco 49ers. He might be the most handsome man to walk the planet and the quarterback for my team, but I don’t see him having a good game against the Vikings this week. They are so damn tough to score against, I believe this will be Jimmy’s first loss as a Niner.

Steve’s Pick - Drew Brees and Michael Thomas, New Orleans Saints. I’m not sure if you’ve noticed, but Drew Brees and the Saints are much better at home than they are on the road. They are projected to score the most points of any team in Week 1, and when you factor in that Michael Thomas will likely see coverage from a rookie defensive back in Taco Charleton, we have a recipe for a huge week from these two.

Jim’s Pick - Andy Dalton and AJ Green, Cincinnati Bengals. Dalton looked sharp in preseason and they have upgraded their offensive line. When you add in a terrible Indy defense. Indy finished 2017 22nd against opposing QBs and 23rd against opposing WRs. Look for the Bengal's passing game to eat in Week 1.

Kacey’s Pick - Matthew Stafford and Golden Tate, Detroit Lions. The Lions are playing the Jets, and I really like Stafford and all his weapons this week. I'd stack Stafford and Tate because of their connection in years past as well as the consistency on both of their parts.

Ryan’s Pick – Deshaun Watson and DeAndre Hopkins, Houston Texans. This might be very tough to do, but did you see the numbers these two put up together last year? It was like Madden! The Pats defense also sometimes starts out a little slow so this could be major points.

Running Back who will go over 100 yards

Steve’s Pick - Alex Collins, Baltimore Ravens. After the Ravens’ Week 10 bye last season, Alex Collins averaged roughly 20 touches per game and was the RB10 over that span. The Bills gave up the most fantasy points to opposing backfields last year and with the Ravens being big favorites in this game, I’m thinking 150 rushing yards might even be possible for Collins this week.

Jim’s Pick - Derrick Henry, Tennessee Titans. The Titans will look to get Henry going early to open up the passing game and going against a suspect Miami defense will surely help that cause. Expect Henry to go over 100 yards and score at least once.

Kacey’s Pick - Ezekiel Elliott, Dallas Cowboys. The Dallas Cowboys are going to rely on their running game very heavily this season. Look for them to get it started in week one versus the Panthers.

Brian’s Pick - Carlos Hyde, Cleveland Browns. Get on board the Browns hype train. They upset the Steelers in week 1.

Ryan’s Pick – Royce Freeman, Denver Broncos. Let the rookie come out of the gate firing! The Seahawks' defense isn’t going to be what it’s been in recent years, and I think this kid is going to have a great debut at home with 120 yards on the ground.

Wide Receiver with the most receptions in Week 1

Steve’s Pick - AJ Green, Cincinnati Bengals. Not even sure I need to explain this one. The Bengals are playing the Colts and AJ Green and Dalton should find a lot of success on the turf in Indy.

Jim’s Pick - AJ Green, Cincinnati Bengals. Say hi to the Indy Defense folks, the defense your favorite team wants to play every week, This game could easily turn into a shootout if Luck is truly back, if so Green is gonna eat, heck he will eat either way.

Kacey’s Pick - Antonio Brown, Pittsburgh Steelers. This one is kind of a given and not an out of the box pick since Brown always balls out, but against Cleveland this week and with Le'Veon Bell out… Brown has this.

Ryan’s Pick – Keenan Allen, Los Angeles Chargers. The dude is healthy and the Chiefs defense sucks something awful. I look for Allen to have one of his 11 or 12 catch games for 135 and a touchdown.