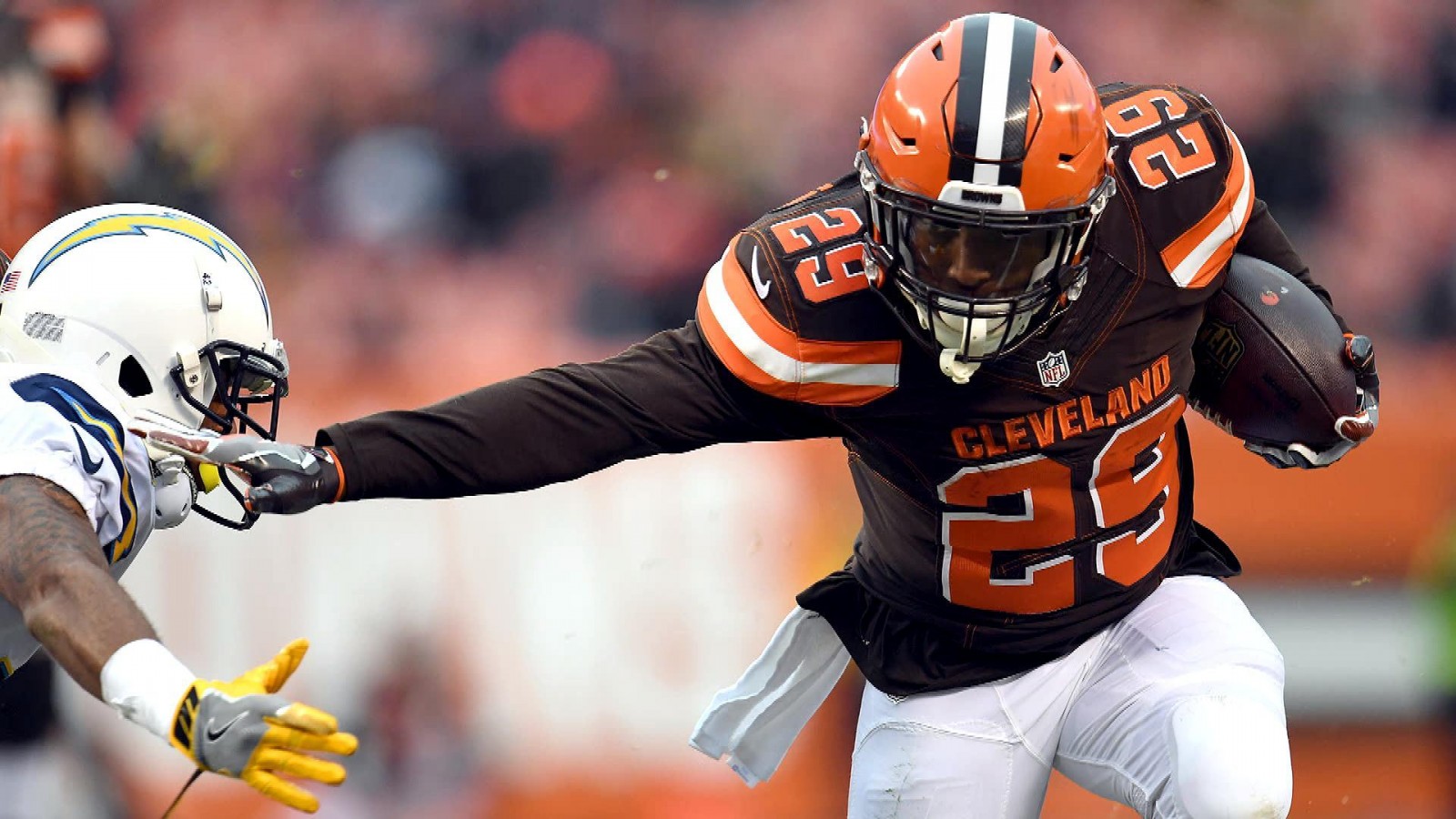 Can you believe it? It’s already Week 10. If you are still reading this that usually means you are still in the playoff hunt, so good job so far. I will try to determine which of the following players can help you going forward or if they were one week wonders.

Guys like Adam Humphries, Jeff Heuerman, Curtis Samuel and Nick Mullens certainly went off in Week 9, but can’t they do it again? The following are my thoughts on these players and more.

Remember that Denver, Minnesota, Baltimore and Houston are all on bye this week which leave a lot of solid players out of your fantasy lineups. Hopefully the players listed below can fill the void.

Before we get to that though here is a list of players I would drop to make pickups this week.

Now on the Waiver Wire gems for Week 10.

Baker Mayfield, QB CLE – Mayfield is still not a QB you can start each week, but we have seen an uptick from him. He has 6 TDs in his last 3 games and has scored over 20 points in 4 of the last 6 weeks. He faced a bad KC defense in Week 9 and did well with 297 yards passing and 2 TDs, even with 1 INT it was a solid week. This week he faces another defense that is ranked in the bottom 5 against opposing QBs. Atlanta has given up over 2,500 yards passing so far while also surrendering 18 passing TDs.

Eli Manning, QB NYG – Yeah, I know most of you wont touch Eli with a 10 foot pole and I can’t say as I blame you. Even with a very slow start and a very mediocre middle, he is still averaging close to 300 yards a game and is 8th in passing yards. Unfortunately, he has only thrown 8 TDs while throwing 6 picks. But if you are missing out on Cousins or Watson this week Eli might make a good one-week stash. He is going against the 49ers who are 8th in passing yards allowed (2,383 yds) and third in TD passes (18), but he may be starting his last game as a Giant.

Marcus Mariota, QB TEN – Mariota has been the epitome of boom or bust this year. He has 2 games, Weeks 4 and 9, where he was a top 7 and top 5 producer respectively. Against a decent Dallas defense in Week 9 he accounted for 3 TDs, including a rushing TD. Unfortunately, in his other 5 games he only has 1 passing TD and only 1 game with over 200 yards passing. This week he faces a NE defense that is currently ranked 27th on the season in fantasy points allowed to QBs. Mariota should be able to do some damage trying to keep pace with Brady.

Nick Mullens, QB SF – Mullens made quite a stir last week, throwing for 3 TDs in the first half against Oakland. Sure, Oakland looked like it was ready to go play golf, but the kid still did what he was asked to do. This week he faces a tougher Giants defense that is ranked 10th on the season against QBs, but they really don’t have to play for either. Mullens could stake out his claim to be the starter for the rest of the season with another good game.

Duke Johnson, RB CLE – HE LIVES!!!! Finally, we got a full dose of Duke Johnson, unfortunately he was either on the waiver wire or someone’s bench, but it does give us hope moving forward. With the changeover at Head Coach and Offensive Coordinator we saw them try to open this offense up and Johnson was the biggest beneficiary. He has another great matchup this week as Atlanta is currently ranked 29th in fantasy points allowed to running backs. They have also given up the most receptions (68) to the position. He should be the TOP waiver wire add of the week.

Mike Davis, RB, SEA – Davis has done very well when he has gotten the majority of the backfield work. Last week he only had 62 yards on 15 carries, but he also added 7 catches for 45 yards on 8 targets. These is still concern for Chris Carson returning in Week 10, so Davis may see another heavy usage game against a Rams’ defense that is 25th against opposing RBs over the last 5 weeks.

Darren Sproles, RB PHI – Sproles is expected back this week and should slide right into the passing down back role, especially after Corey Clement saw only 13 snaps in Week 8 before the bye. They will be facing some tough rushing defenses going forward, which should play well for Sproles if he can stay healthy.

Elijah McGuire, RB NYJ – McGuire jumped right in after being activated last Saturday. He rushed 7 times for 30 yards and added 3 receptions for 37 yards on 5 targets. He actually played 13 more snaps than Isaiah Crowell. The Bills are a tough defense but have given up 53 receptions to RBs and are third in touchdowns allowed to the position with 12. As long as McGuire is involved in the passing game he could be a decent flex option moving forward.

Theo Riddick, RB DET – Week 9 was only the second game all season that Riddick scored over 10 fantasy points, but with the loss of Golden Tate, he may be called on more to try and move the chains. He faces some very tough run defenses so there is a chance they lean on Riddick to use the short passing game as a rushing attack.

Spencer Ware, RB KC – Ware continues to be a mop up guy and that won’t change, but the mop up time may become more frequent as the team tries to make sure Kareem Hunt is fully healthy for the playoffs. In 2 of the last 3 weeks he managed to score in double digits, but those two games were sandwiched around a game where he didn’t get a single touch. Right now he is only a stash in deeper bench leagues.

Josh Adams, RB PHI – Adams is a purely speculative add. Philadelphia is still looking for an early down back that can also run out the clock. Smallwood has shown that he is not that guy. Adams could start to see more work starting this week, but he has a tough matchup against Cowboys’ defense that is allowing under 80 yards rushing a game. The rest of the schedule doesn’t look much better.

Marquez Valdez-Scantling, WR GB – Valdez-Scantling is dialed in as the #2 WR for GB and if he is on the waiver wire people weren’t paying attention, but that is to your advantage. If he is on your waiver wire he should be the top Wide Receiver add this week. With Geronimo Allison now on IR, it should really open the door for Valdez-Scantling to be a solid WR3 with WR2 upside going forward.

Tyrell Williams, WRs LAC –Tyrell is a boom or bust player, because he is just not seeing a large enough target share to breakout. He does have 4 TDs and 2 100-yard games in his last 3. Keenan Allen will continue to be the target monster on this team, but Williams will still get shots every week for the big plays.

Dez Bryant, WR NO - The Saints Bryant on Wednesday and I am sure they will do whatever they can to get him right on the field. Hopefully he still has something in the tank because he could be a big pickup if he does. Just remember that Brees still likes to spread the ball around to everyone.

Adam Humphries, WR TB – Humphries really surprised most in Week 9, leading the Bucs in receptions, yardage and touchdowns. He has seen a dramatic increase in targets over the last 3 weeks, averaging 9 a game. It is very hard to tall if this is a 1 game aberration or if this is something that can be counted on moving forward. The bad thing is that there are so many mouths to feed in this passing game. He is definitely worth a flier to see if the trend continues.

Corderrelle Patterson, WR, RB NEP – If only Patterson was as good a receiver as he is at everything else. He is one of the best kick returners in the history of the game and has shown the last 2 games that he can be used as a big back in Belichick’s offense. Against Green Bay last week he rushed 11 times for 61 yards and a touchdown. As of this writing it looks like Sony Michel will be back in Week 10, but it is no guarantee. If Michel can’t go then Patterson will once again be in play.

Maurice Harris, WR WAS – I thought Harris would be more involved in Week 8 against the Giants and when that didn’t happen I didn’t have much faith in him for Week 9. Of course that means he goes off and boy did he. He saw 12 targets as Washington as playing catchup all game and caught 10 of them for 124 yards. With Paul Richardson now on IR and Crowder and Thompson not looking good for Week 10, Harris could again be a sneaky play this week and maybe beyond.

Curtis Samuel, WR CAR – Samuel is very hard to count on but coming off a 2-TD performance people will be clamoring for him. Not so fast. He is very unique as he has more rushing TDs (2) that receiving (1). He continues to play less snaps than either DJ Moore or Jarius Wright. His fantasy scoring will continue to be a fluky chance each week which makes him very hard to start.

Jeff Heuerman, TE DEN – Heuerman is coming off his best game as a pro with 10 receptions for 83 yards and a touchdown. Those 10 receptions equal the number he had in his previous last 5 game combined. The weird part was that he saw the most targets on the team with 11. It’s hard to think this becomes something we can count on, but maybe the loss of Demaryius Thomas plays into Heuerman’s hands. They are on Bye this week, so you shouldn’t have to pay much for him.

Jordan Thomas, TE HOU – Thomas has 3 touchdowns in his last 2 games and that is about all we can say about him. He’s only caught 9 passes for 127 yards on the season and this week Houston most likely will get Keke Coutee back and make Thomas even harder to trust.


You can always find me on Twitter at @Fantasytaz.