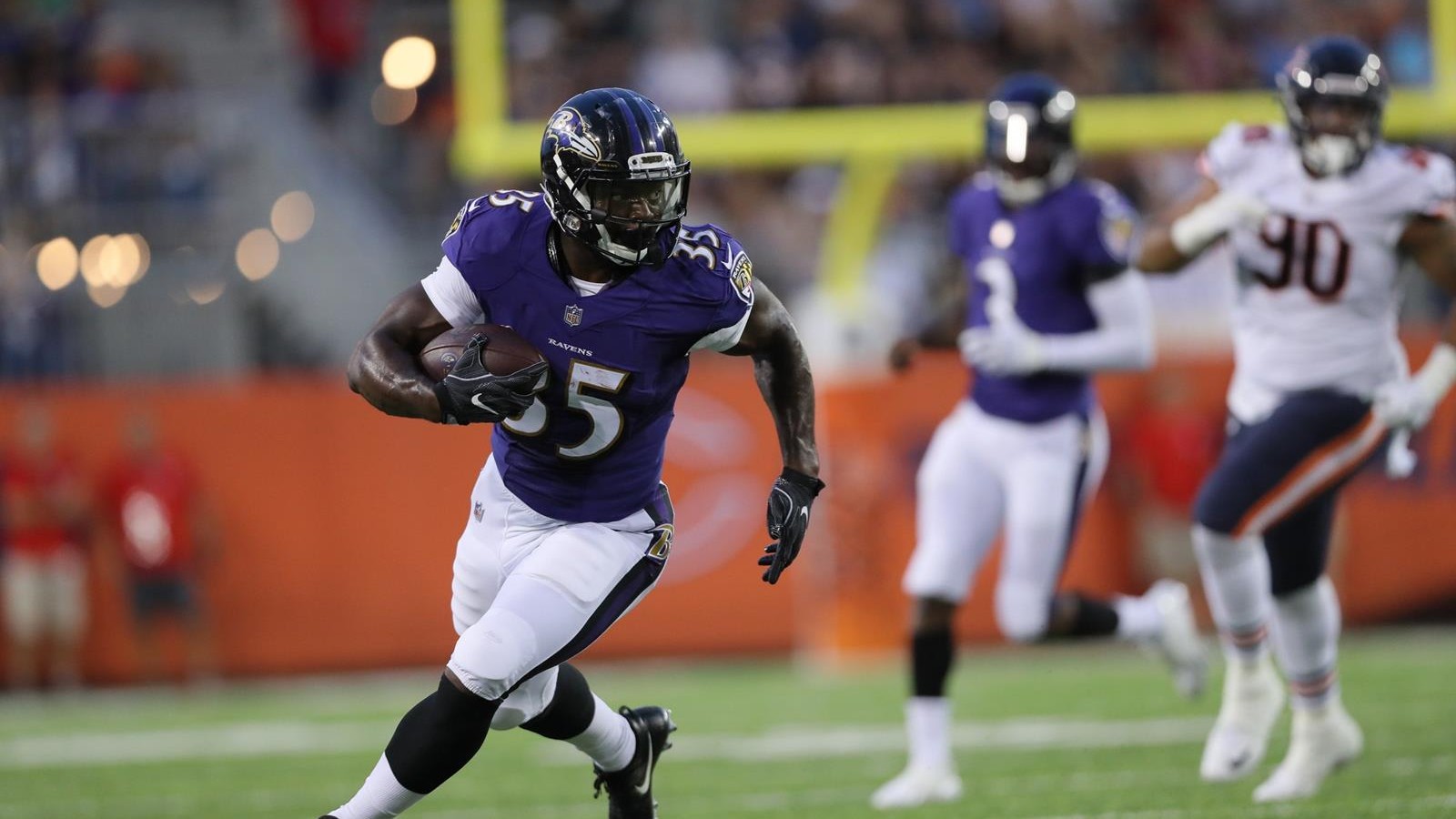 Week 12 Waiver Wire: Who the heck is Gus Edwards?

I don’t know about you, but I sure wish we had more games like the killer MNF game we were all lucky enough to watch on Monday night. There have been 773 MNF games and this was the highest scoring game of them all and finished as the third highest scoring game of all time. There was 105 total points, 14 total touchdowns, 891 passing yards, 95 passing attempts and Tyreek Hill finished the night with 215 receiving yards. I love games like this, but then again games like this don’t happen very often.

Of course every single player that was in that exciting game last night is now on bye in Week 12. Holy Crap!!!

Ok enough about the greatest game ever. Let’s get on to the Week 12 waiver wire as you try to shore up your fantasy teams as we head into the fantasy playoffs. Making sure to get the handcuffs for your starting RBs is key before the trade deadline so make sure you do what you can to get the Malcolm Brown’s and Spencer Ware’s that are out there.

Now on to the players you should be thinking about picking up this week.

Jameis Winston, QB TB = And the see saw continues. This week TB’s quarterback du jour is Jameis Winston. At least to start anyway. Will he finish the game as the starter? You guess is as good as mine. If any team surely needed to run a 1 QB system, it is the Bucs. He has 3 decent matchups ahead versus the 49ers, Panthers and Saints all at home.

Lamar Jackson, QB BAL – Jackson was what most expected, a lot of running with a few passes mixed in. His 27 rushing attempts were the most by any QB in the Super Bowl era. The 117 rushing yards definitely gives him a nice floor, but he will need to do more through the air to get him into QB 1 range. He did complete 13 of 19 passes for 150 yards, with a very respectable 7.9 yards-per-attempt average, but he failed to throw a TD and added one interception. He does have some nice matchups ahead.

Colt McCoy, QB WAS – McCoy steps in after Alex Smith’s gruesome leg injury and did okay. He only completed 6 of 12 passes for 54 yards, but he added another 35 yards on the ground and 1 passing TD. The positive news is that he knows this offense very well, so they will not have to make any changes to the playbook for the backup.

Patrick Mahomes, QB KCC – This kid is finally coming into his own, especially after his 6 TD performance on Monday night. Sure he turned the ball over 5 times, but that is most likely an aberration. Look for him to get back on track after his Week 12 bye.

Gus Edwards, RB BAL – Edwards was easily the surprise player of the week. This UDFA out of Rutgers was not on anyone’s radar after only having 15 carries for 64 yards on the season before this game. He is a powerful north-south runner, who managed 90 of his total 115 yards after contact, while breaking 7 tackles along the way, according to Pro Football Focus. Baltimore faces some friendly defenses down the stretch, grab Edwards now…

Josh Adams, RB PHI – Adams has taken over the early down work for Philadelphia and he finally got you an RB 2 score if you had to start him, although outside of desperation he would’ve been hard to start. He is still hard to start and only gets you a decent return if he scores. He is just not getting enough touches to count on. Even in this game where he scored just over 16 fantasy points, he only touched the ball 10 times. He does face the Giants this week, but after that the road gets real tough for him.

Giovani Bernard, RB CIN – If you own Joe Mixon now is the time to make sure you have Bernard on your bench for the playoff run you are about to make. Bernard is on Mixon injury away from being in a very solid position. Cincy has a nice schedule moving forward for the RBs and Bernard will feast if given the chance.

D.J. Moore, WR CAL – Moore exploded in Week 10 with 7 receptions for 157 yards and a touchdown on 8 targets. All were season highs for him and with Devin Funchess not playing well lately, it could open the door for him. Just be careful because the one thing we do know is that MOST rookie WRs are very volatile from week to week.

Adam Humphries, WR TB – Over the last month Humphries has a been a solid WR2, averaging over 16 points a game. Against the Giants he caught 3 passes for 60 yards and a touchdown on 5 targets. The good news is that the TD came from Winston who is starting Week 12 against the 49ers. There are a lot of mouths to feed in TB though, so his consistency is in question.

Tre‘Quan Smith, WR NO – Smith had his biggest game of the season against the Eagles in Week 10; targeted a whopping 13 times and catching 10 of them for 157 yards and a touchdown. People will be jumping all over him this week on waivers but temper your expectations. He played a great game, making catches all over the field, but will this be an every week occurrence or that occasional big game this position always produces for the Saints? It is hard to say at this point, but I am betting on the occasional big game.

Keke Coutee, WR HOU – After missing his last 2 games and a bye before Week 11’s game Coutee is on a lot of waiver wires this week. Even though he was on the field for fewer snaps than Demaryius Thomas, he was the most targeted receiver on the team with 9. Thomas only saw 1. Seems to be the theme this week, be careful starting rookie WRs coming off big weeks.

Dontrelle Inman, WR IND – The Indianapolis WR carousel continues with Inman being the last fashion to won. In his last 3 games he is averaging just over 10 fantasy points a game. With the way Luck is playing you have to grab the latest piece of the puzzle and right now that is Inman.

Curtis Samuel, WR CAR – Samuel had a good week with a 5-55-1 line and got you 16.5 fantasy points if you had to start him. He quietly now has 5 touchdowns in 7 games, including 2 rushing TDs. He will continue to be a tough start each week, but the touchdowns at least give him a decent chance to score each week.

John Ross, WR CIN – For the second week in a row Ross got into the end zone but didn’t do much else. He was targeted 7 times, but only caught 2 for 27 yards. He may be the king of touchdown dependency and with it looking like AJ Green may be back in Week 12, Ross only comes back into play if Green has a setback or re-injury.

Jordan Reed, TE WAS – As is always the case, just when you are ready to give up on a player they go off, welcome to Jordan Reed’s season. He did catch his second TD of the season, which was also the first pass of the day by Colt McCoy. With this offensive line so beat up, Reed may become McCoy’s safety blanket. He is worth the shot at this point of the season for a bench TE2.

Antonio Gates, TE LAC – Gates is back from the dead. At least he was in Week 11 with 5 catches for 80 yards and a touchdown. It is only his second TD all season and his second double-digit score this season. There is a reason he is on the waiver wire, but just maybe Rivers will start to go back to the old boy with his receivers being an iffy choice each week. Most likely a one week random shot here, but with the state of the TE position this year, why not take a shot that it isn’t.

Tyler Higbee, TE LAR – Over the last 4 weeks Higbee is playing in over 75% of the offensive snaps and has put up double digit scores in each of his last 2 games, including a touchdown against the Chiefs in the barnstormer game of the year. Very hard to trust but is coming on. Unfortunately, he is on bye in Week 12.

Gerald Everett, TE LAR – Everett is not seeing a lot of targets, nor is he even seeing a ton of snaps, but he does have 3 touchdowns in his last 2 games. Over his last 3 games he is averaging 13 points a game. Unfortunately, he is splitting time with Higbee, so he needs to score a TD to get on the board. Be careful here. Unfortunately, he is on bye in Week 12.