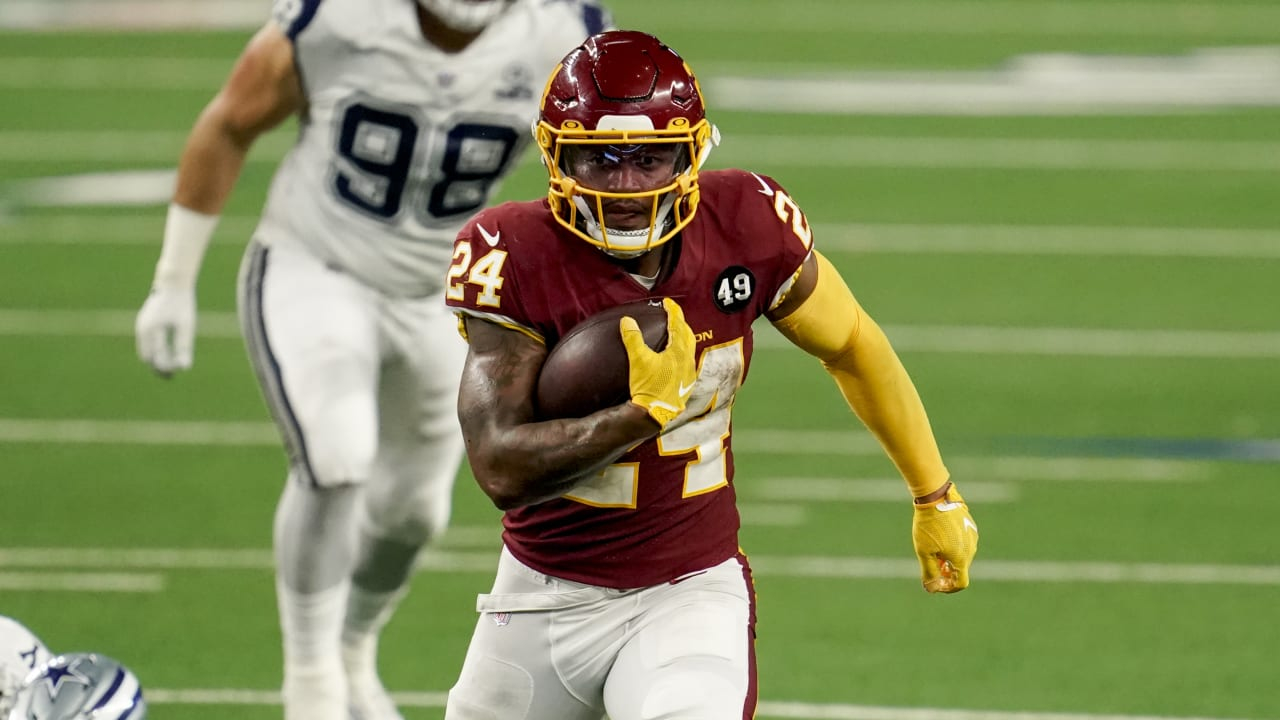 Wow, what a week! Leonard Fournette absolutely crushed it with four touchdowns, Cam Newton fell on his face, and there were injuries galore. DraftKings went through and sneakily increased some salaries of premium backups this week, so you'll need to find some value plays to fit in all of your studs. As always, I’m here to take you through my picks for the best Week 13 DFS values. 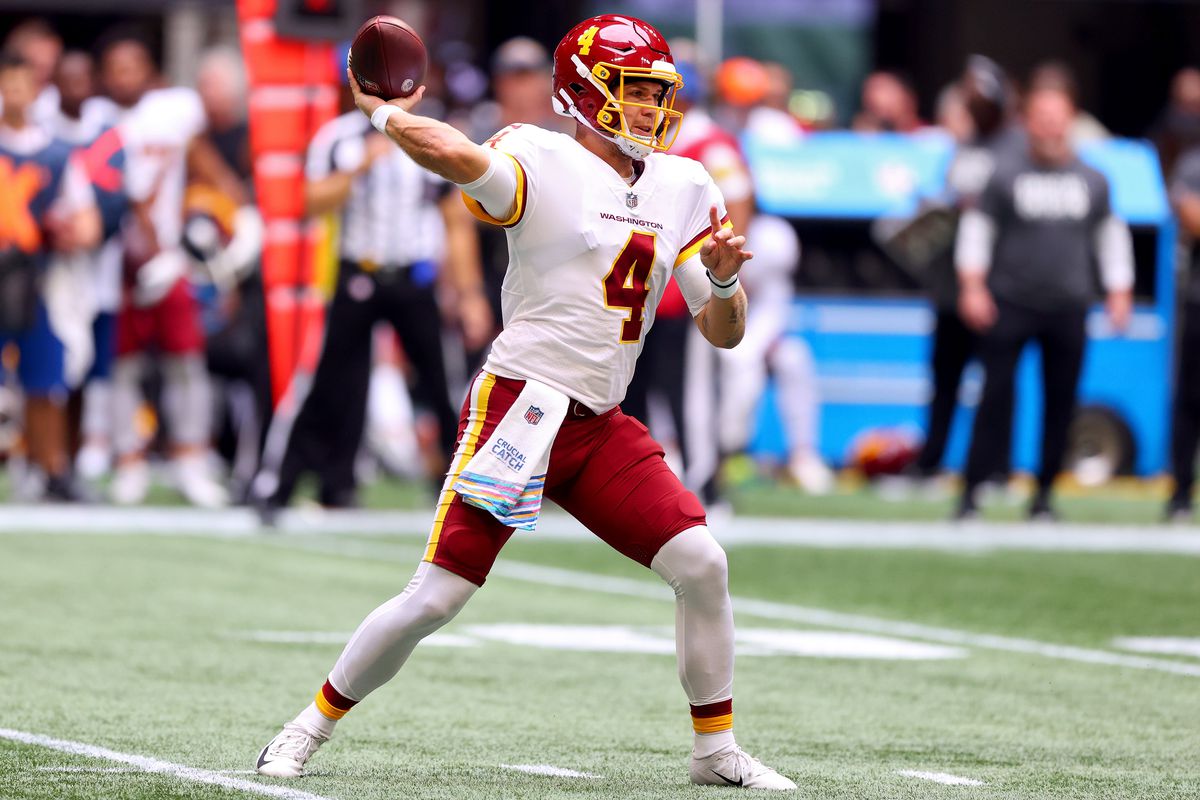 Taylor Heinicke put up modest numbers against the Seattle Seahawks on Monday night, but his stat line would have looked much better had the refs not overturned a Logan Thomas touchdown. However, he still ended the game with 223 passing yards, one touchdown, and one interception. In Week 13, Heinicke faces the Las Vegas Raiders, who have allowed 19.62 fantasy points per game over the past four weeks, 28th in the league. The Washington Football Team is just below them at 27th, so I don’t think Antonio Gibson has as heavy a role as he had Monday night. 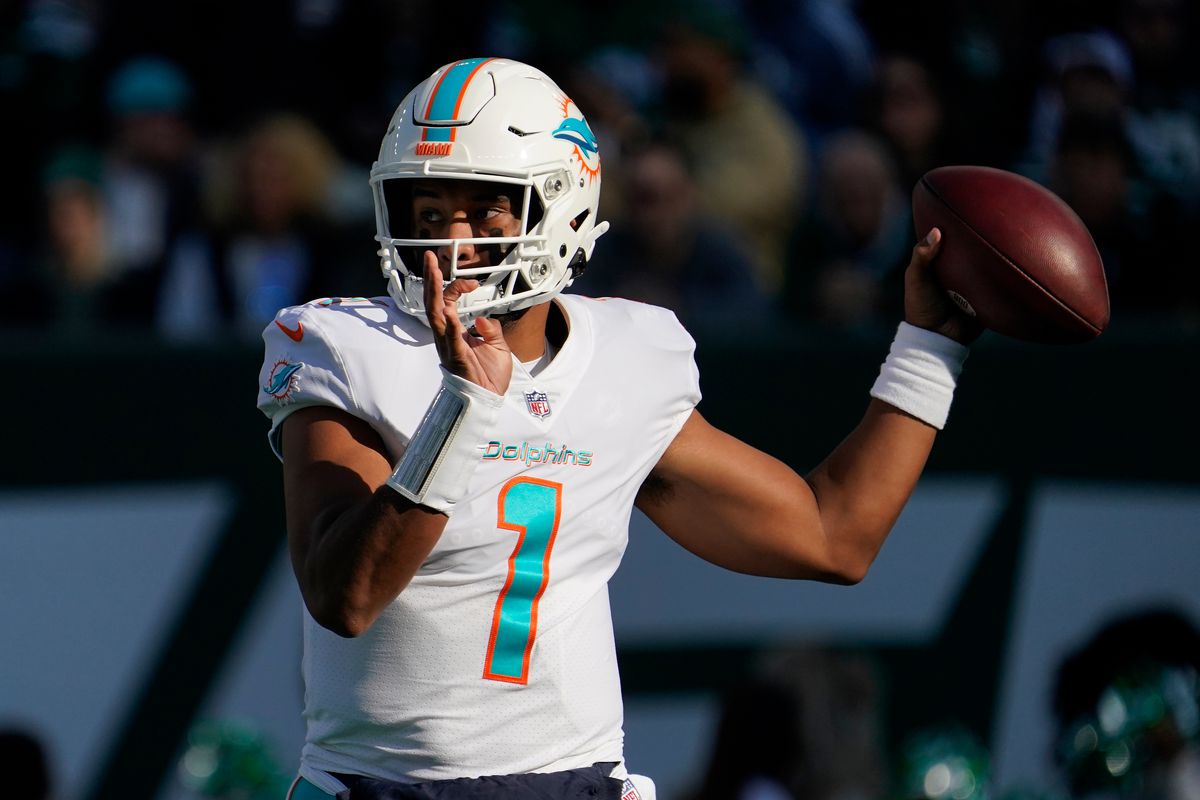 Tua Tagovailoa isn’t flashy, but the second-year quarterback has shown to be a competent starter since returning from injury. In addition, Davante Parker has a chance to return in Week 13, giving him another weapon to work with. The New York Giants are top ten in the league in fantasy points allowed to the quarterback over the past four weeks, but Tua provides a solid floor with his rushing ability, so I don’t think he’ll finish under value. He’s also been much more accurate lately, with an 81.8% completion rate in Week 11 and an 87.1% completion rate in Week 12. 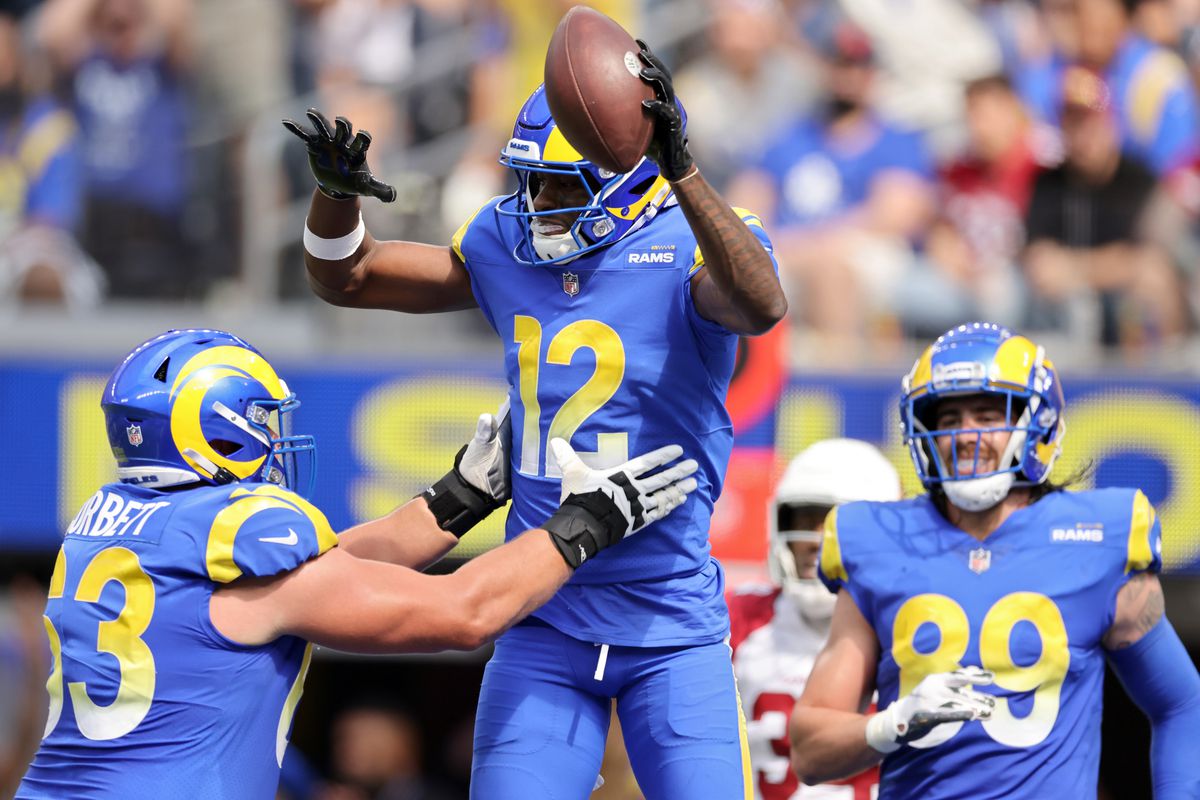 Week 12’s matchup against the Green Bay Packers saw Van Jefferson put up a career-high 93 receiving yards while finding the end zone once. He almost had two touchdowns, but Cooper Kupp threw it just out of bounds. These stats aren’t a one-off, as he is tenth among wide receivers in fantasy usage in Weeks 9-12 per @haydenwinks of Underdog Fantasy. I don’t expect that to change this week against a downtrodden Jacksonville Jaguars team. Sure, the Jags have improved somewhat, but that’s not saying a ton. They’re still 21st in the past four weeks against wide receivers, giving up an average of 36.26 fantasy points per game. 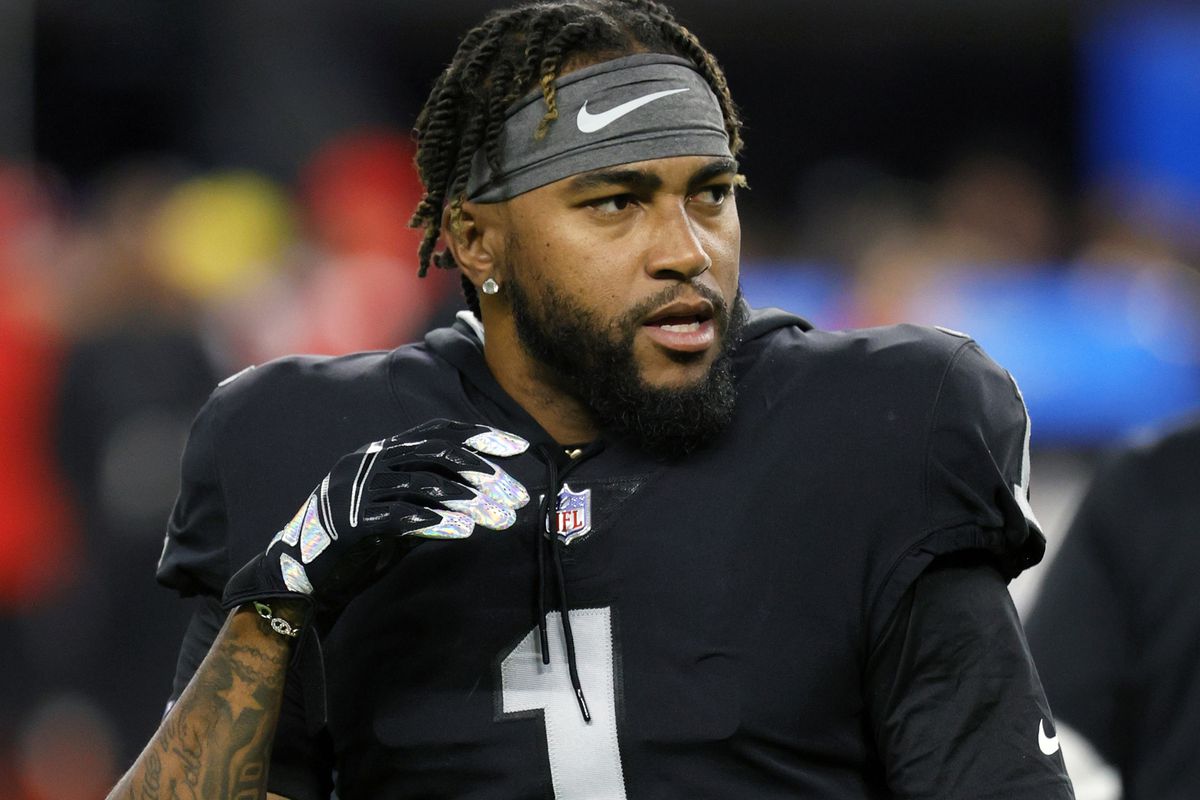 This week, I’m entirely buying into the revenge game narrative with DeSean Jackson facing his former team, the Washington Football Team. Jackson has seen a steady uptick in snaps since he joined the Las Vegas Raiders, and he proved he still had speed in Week 12 by torching the Dallas Cowboys’ secondary for a 56-yard touchdown. The Washington Football Team is allowing 39.39 fantasy points per game and 12,94 yards per reception to wide receivers. Jackson remains the downfield threat on this Las Vegas offense, and I look for him to have a prominent role going forward. 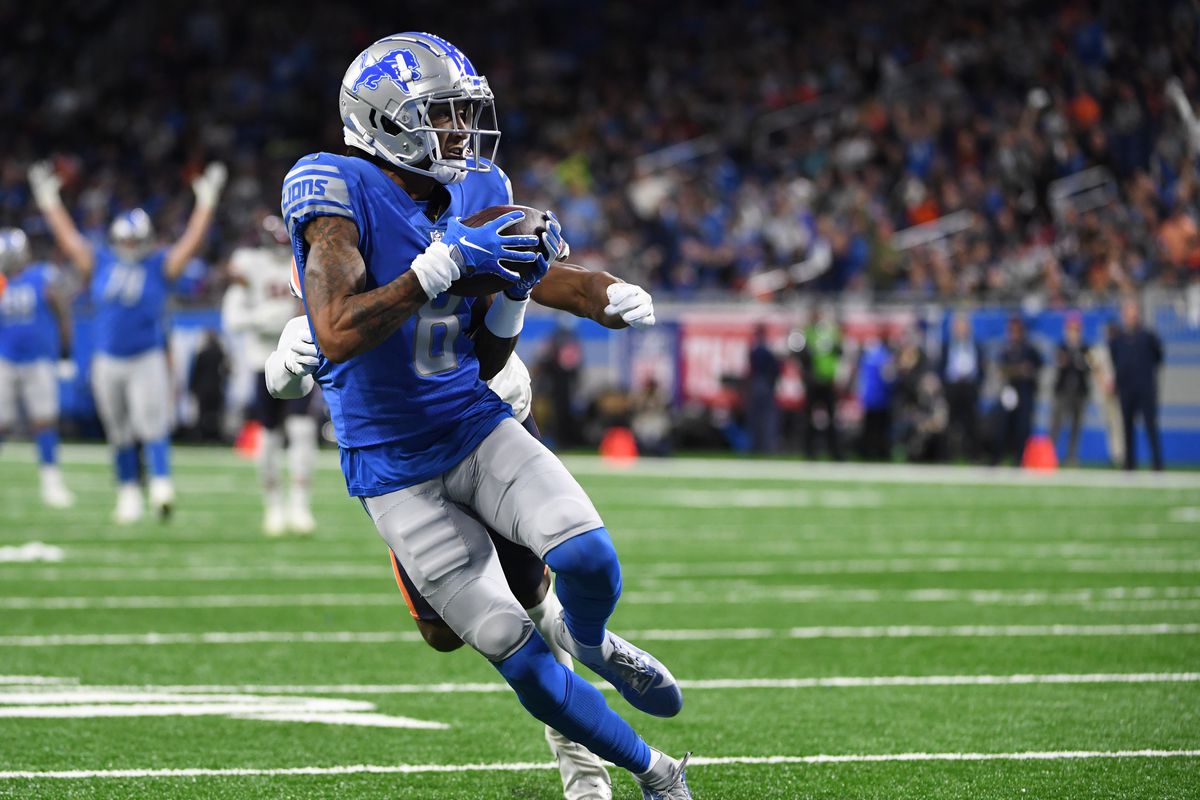 He’s only been with the Detroit Lions for three weeks, but Josh Reynolds wasted no time in making his presence known. He played 90% of snaps in Week 11 and 88% in Week 12 when he broke out as the clear-cut WR1 seeing a team-high five targets. Reynolds and Jared Goff already have a rapport from their time together on the LA Rams, and it should continue to build as Reynolds becomes more comfortable with the system. The Lions face the Minnesota Vikings in Week 13, who have given up a whopping 44.45 fantasy points per game to wide receivers over the past four weeks. At $3,400, Reynolds is a smash play. 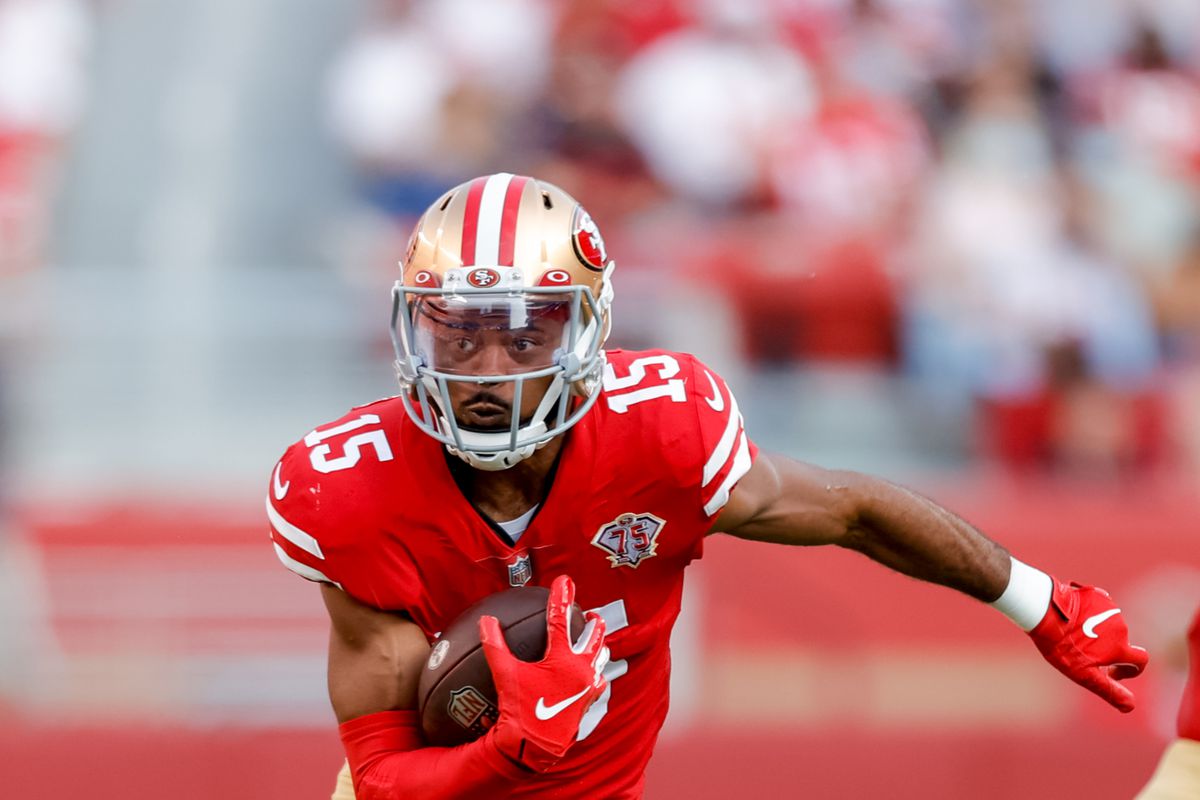 This one is a deep dart throw, but if you’re a bit low on cap space, he could be sneaky. Jauan Jennings looks to be the guy to benefit most from Deebo Samuel’s absence, playing more snaps than Trent Sherfield and seeing more targets than George Kittle in Week 12. He also found the end zone for the second time this season. The 49ers face the Seattle Seahawks in Week 13, a middle-of-the-road defense against wide receivers, but at $3,100, you’re looking for a dart throw with upside. Jennings has that and then some. 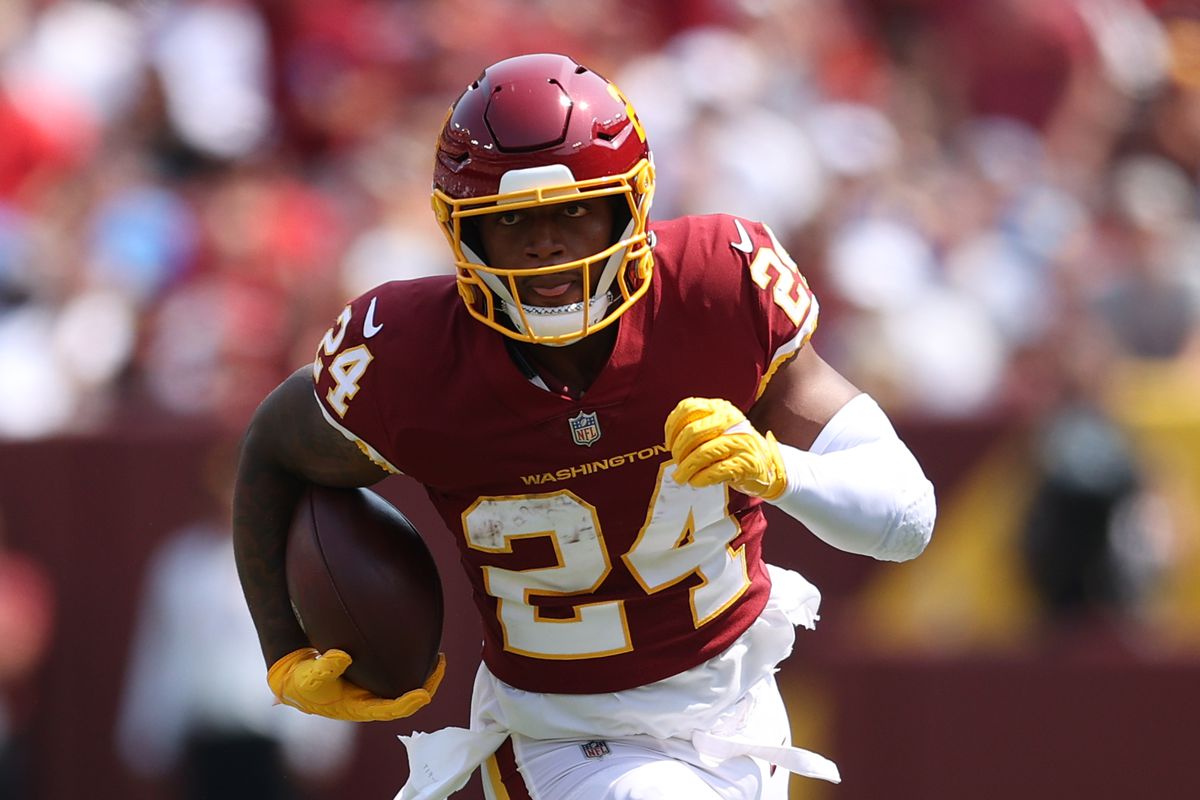 Okay, $5,700 isn’t exactly a basement buy, but it seems extremely low for Antonio Gibson. After his bye week, Gibson has two games over 20 PPR points, and the Week 13 matchup is tasty. The Raiders are 29th on the season against running backs, giving up 27.36 points to the position. J.D. McKissic is also banged up after Monday night’s tilt with Seattle, so I don’t expect him to vulture Gibson’s touchdowns this week (or at least as many). We could see a monster game this week, and he’s going to be in 100% of my lineups. 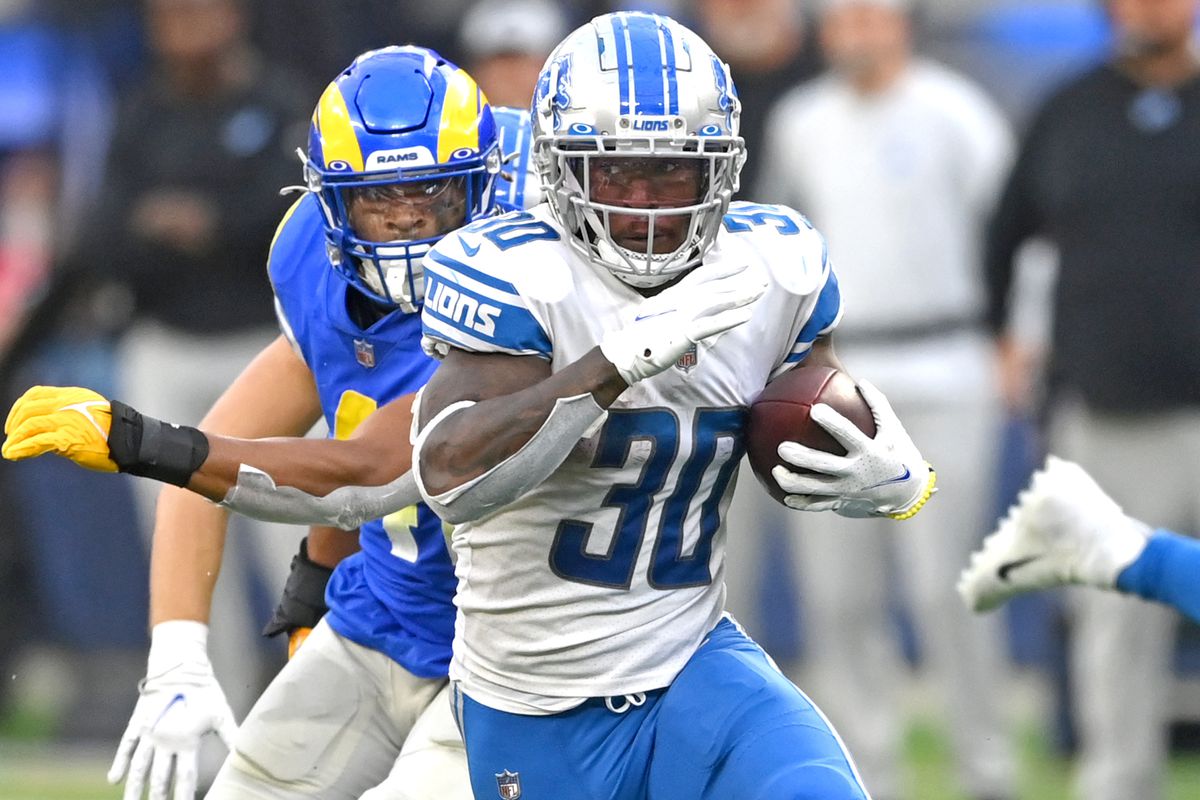 While D’Andre Swift was initially listed as day-to-day, Dan Campbell left us with some doubt Monday afternoon, saying, “It’s hard to say you’d see him playing.” Jamaal Williams is the next man up in that backfield, and he’s a pass-catcher, making him valuable in a PPR format. He’s not going to run the ball down your throat, but he caught five of five against Chicago in Week 12. The Minnesota Vikings are 27th against running backs this season, giving up 28.53 fantasy points per game. While the game script may be negative against the Lions, Williams’ pass-catching ability makes him a valuable option this week in DFS. (Side note: I wouldn’t pair Williams with Reynolds. It’s one or the other for me, depending on the rest of your build). 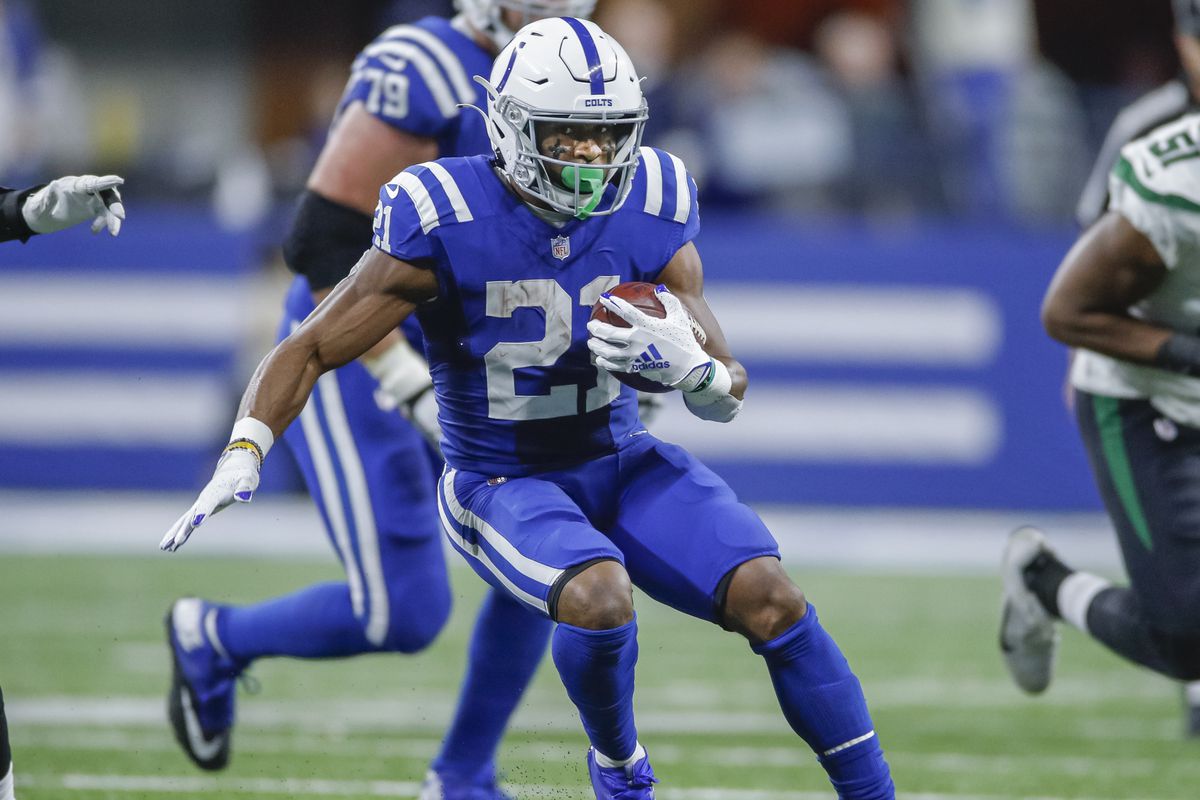 I’m including Nyheim Hines as a bottom-of-the-barrel pick here, but sometimes we have to take chances, right? I’m including Hines on this list because I think the Colts get out to a huge lead and save Jonathan Taylor for a potential playoff run. I’m using Week 9 against the New York Jets as an example. Hines typically plays between 30ish-to20ish percent of the snaps, but in Week 9, his usage jumped to 45%. That same week, the Colts were ahead 28-10 at the half and continued with Hines the majority of the second half. Sure, it’s not a huge jump, but along with his pass-catching ability, Hines could be a slate breaker if the Colts get out ahead of the Texans fast. 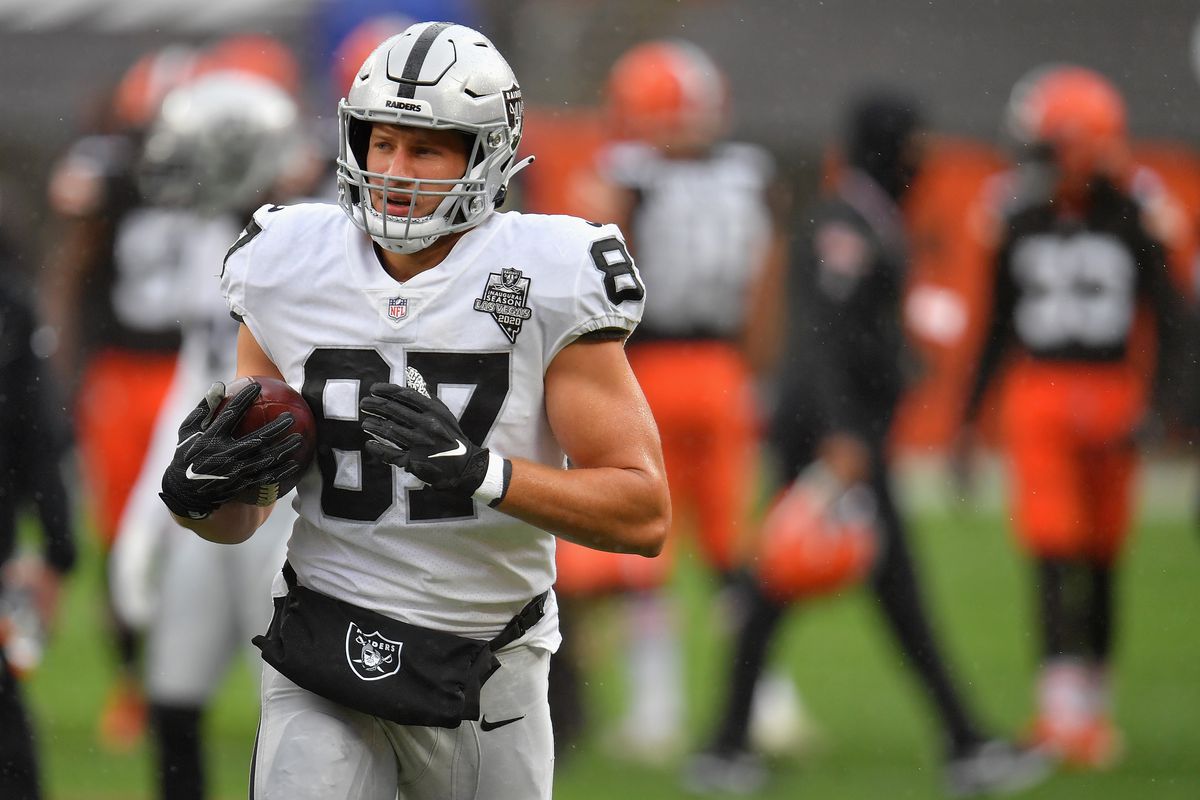 If you think my entire value list is based on injuries to other players, well, it kind of is. We’re deep enough in the season that DraftKings has everyone priced fairly appropriately, so we have to dig to find the values. Keep an eye on Darren Waller’s status ahead of Sunday’s game, but if he doesn’t play, Foster Moreau is an excellent plug-in at his salary. He is touchdown-dependent, but he played 89% of snaps and saw five targets in Week 12 against the Dallas Cowboys. The Football Team is middle-of-the-road against the tight end, but at this salary, if Moreau can put up ten points or so, he returns value and frees up a ton of cap space. 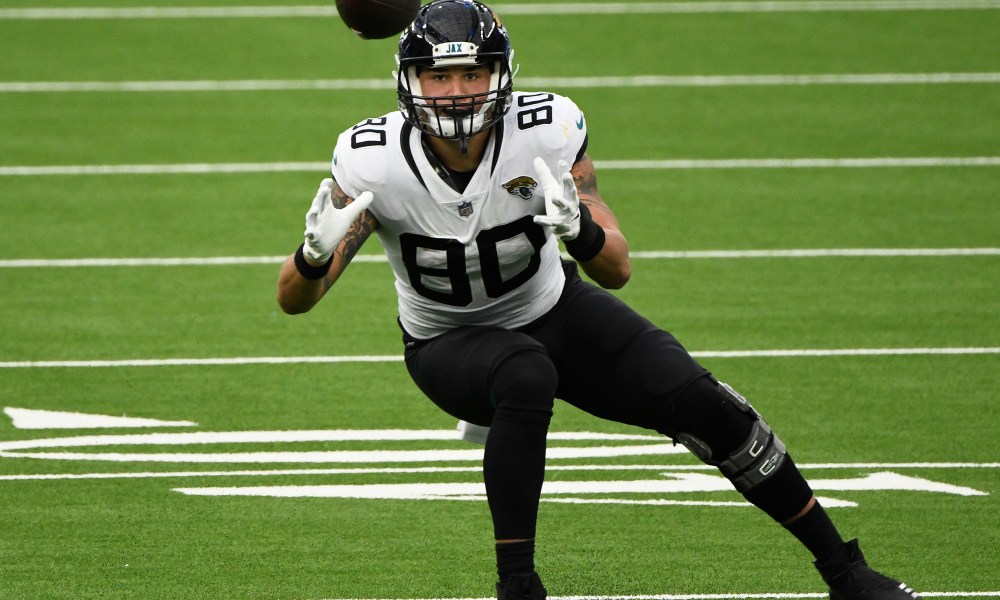 Finishing up this week’s slate of “people who are valuable because of injury,” we have James O’Shaughnessy. Dan Arnold was placed on injured reserve this week, and before his stint on IR, O’Shaughnessy was a focal point of this offense in his own right. It’s hard to base production on one game, but it’s apparent that Urban Meyer funnels his offense through the tight end position. The Rams are allowing 12.1 fantasy points per game to the tight end position over the past four weeks, and Trevor Lawrence isn’t going to be able to throw it deep into the Rams’ secondary. If he can simply post double-digits, he’s paid back his salary, then some.