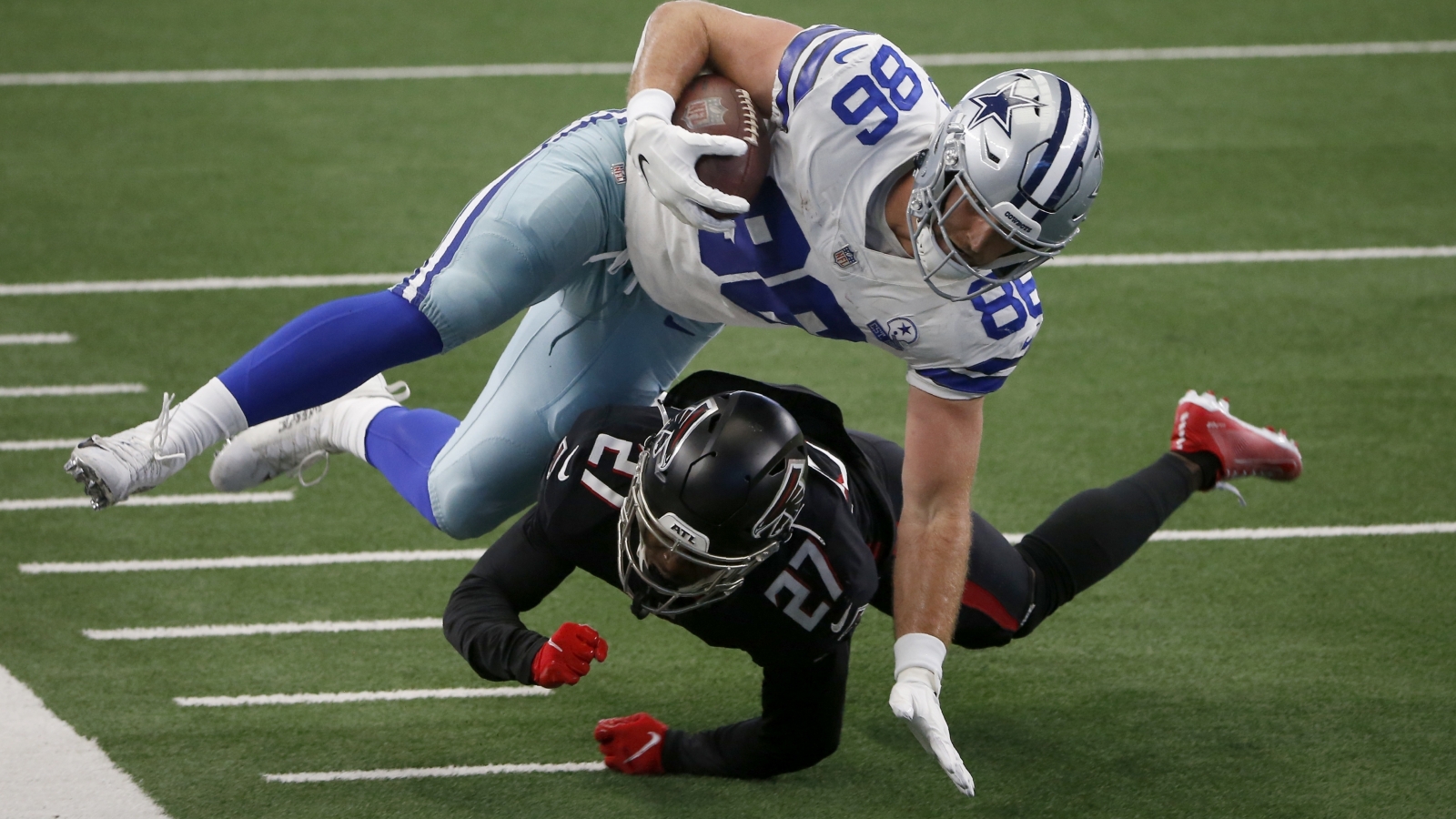 Are you having one of those weeks where your starting (insert whatever position here because they’re all hurt) is out? Do you require someone to be a temporary stop-gap until that player comes back? Sometimes the waiver wire doesn’t go your way. Sometimes you have way too many players on IR and don’t know what to do about it. Never fear, throwing out a Hail Mary is here.

If you’re in a bind and want to try and go for the points, here are a few options as Hail Mary plays this week. Will they all do a fantastic job? Chances are someone will bust. But to me, these are the players with excellent potential to give you big numbers while also being lower on the totem pole than most normal starters. 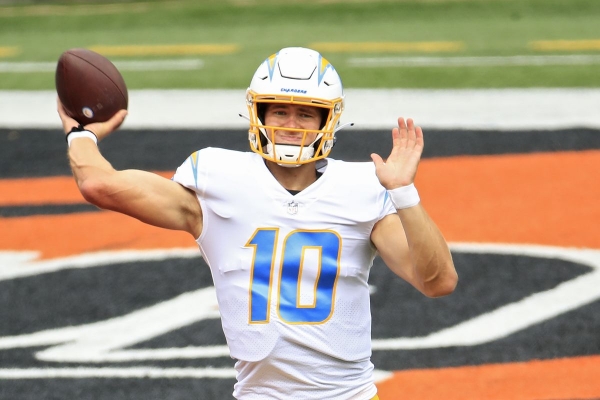 Tyrod Taylor did not start last week due to a freak accident where the team doctor gave him a pain injection and punctured his lung. Justin Herbert moved into the starting role and did admirably. In his first start against the Chiefs, Herbert looked surprisingly good.

The rookie quarterback hurled 33 balls and completed 22 of those passes. He passed for 311 yards while also launching one touchdown to go with one pick. Herbert also rushed for 18 yards, and he additionally scored a rushing touchdown in that contest.

Herbert being in the competition is helpful to both Austin Ekeler and Joshua Kelley. Each running back put up their best game of the small sample size this season. Starter Ekeler rushed 16 times for 93 yards while also going for 55 yards on four targets. Kelley was in the Melvin Gordon type of role, and he ran for 64 yards on 23 rushes. He also happened to bring in three of his targets for 49 yards.

This week, Herbert and the Chargers meet a Carolina team that has conceded 30+ points in each game so far. The Panthers’ defense is a pitful one as of late, giving up an average of 300 passing yards and 127 rushing yard a contest. Herbert should be a suitable stream in Week 3, and he could give you dependable play in the future if he continues to impress. Taylor is supposed to play when healthy, but Herbert will try his hardest to become the permanent starter.

Great news if you need a wide receiver play for this week. Adam Humphries is available in a ton of leagues. He is a wide receiver that leads the Titans in receptions. One factor that has played well into this is the fact that A.J. Brown is currently hurt. That injury gives Humphries more openings in the passing game.

Ryan Tannehill has valued Humphries as a weapon in the 2020 season. Humphries has caught 11 of 13 passes thrown his direction this season while also grabbing a touchdown (in the win against the Jacksonville Jaguars).

The wideout who signed a four year, 36-million dollar contract in the offseason with the Titans looks to extend his hot streak this week against the Minnesota Vikings and their less-than-stellar defense. Quarterback Tannehill has been playing consistently, and that trend should continue in Week 3. 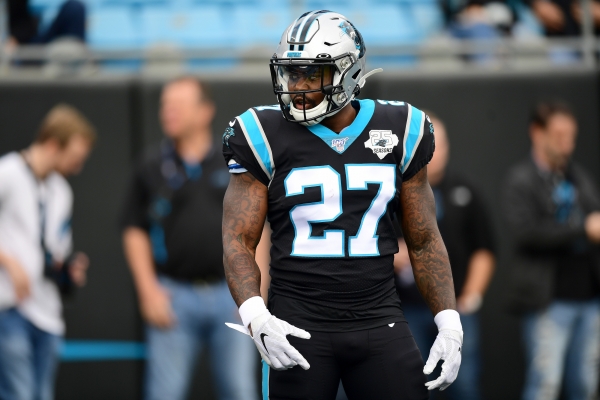 Sadly, Christian McCaffrey was taken away from our lineups for the foreseeable future as he is on IR with a high ankle sprain. He’ll be absent from at least three Panthers games, if not more. If you’re in a pickle, especially as someone who drafted McCaffrey in the first round, there is a player who could be a bandaid this week.

We are going into this game with the expectation that Mike Davis, the backup running back in Carolina, is not going to do anything “McCaffrey-ish.” This runner is not the same type of player McCaffrey is, but he could still be a nice plug-in until McCaffrey returns.

He is a risky play, a boom or bust kind of guy whom quarterback Teddy Bridgewater has confidence in. Coach Matt Rhule has additionally been talking up the RB and his excellent training camp, but we all know coach speak doesn’t mean much. Still, the relationship with Bridgewater is there, and the Panthers will need to get someone the pigskin. Davis has a lot of shots in this offense. Last week, he caught all eight of his targets for a sum of 74 yards. This week, the Panthers take on a Los Angeles Chargers defense that is middle of the pack when it comes to rushing yards allowed per game (123.5 yards on average). The Chargers have conceded 9.1 fantasy points to opposing runners over two weeks, so Davis appears to be an adequate flex option.

Davis was a high commodity on the waiver wire this week and a suitable play if you are in a significant jam and have no other alternatives. He should get you fantasy points (don’t expect a Christian McCaffrey type of day). He is a more attractive option for PPR leagues as his pass-catching ability is top-notch. Are you looking for a workhouse back this week? This RB is the guy to keep an eye on. Oh, and the running back state in Carolina is a lot less confusing than what we’re seeing with the Giants after Saquon Barkley went down. 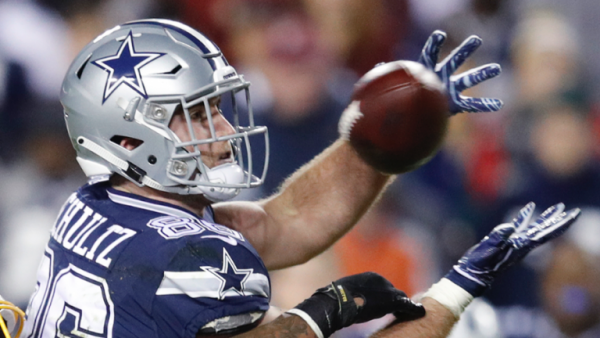 I’ll confess, I was one of the first people to write Dalton Schultz off after Blake Jarwin went down for the season. Schultz proved me wrong in Week 2, taking on the Atlanta Falcons at home. He stepped in as the number one tight end option in Dallas and caught nine of 10 passes for 88 yards and a score when facing the Falcons. Oh yeah, and he led the Cowboys in targets on Sunday as well (with 10).

Schultz will see a solid game versus Seattle this week, a team allowing 831 air yards this season (second highest by any NFL team). Alongside Schultz, the Cowboys will have Amari Cooper, CeeDee Lamb, and Michael Gallup vying for targets. The defenses’ attention should be on those wideouts, so keep an eye on Schultz to continue his impressive play. The game on Sunday should be a shoot-out.

Schultz’s only mistake in the previous game against the Falcons was a fumble, but it appeared everyone on the Cowboys was fumbling throughout that game. The big man was out on the field last week for 57 snaps, fits in well with the offense, and should continue to be one of Dak Prescott’s preferred weapons.