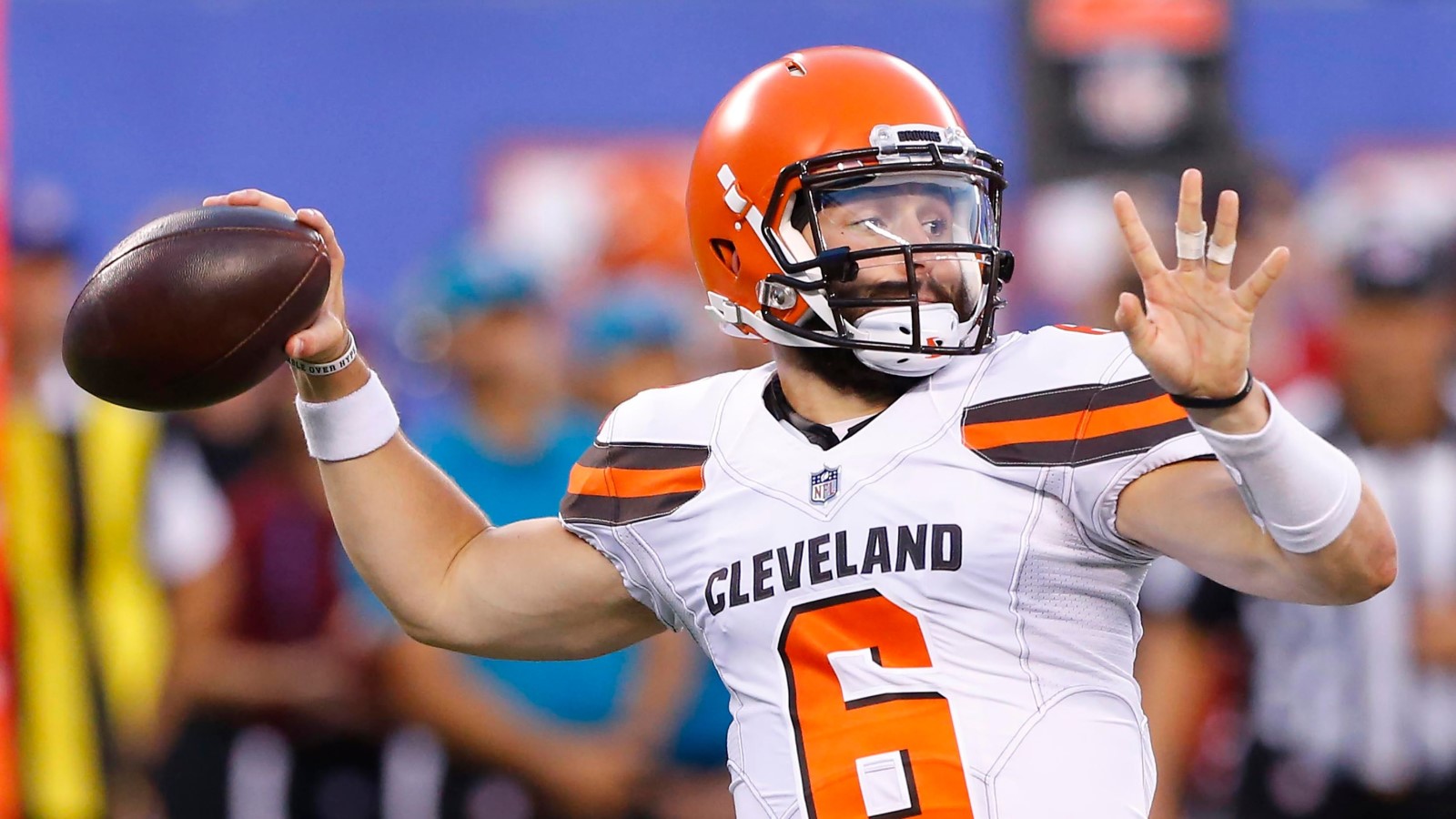 Another week in the books and another crazy week. Drew Brees breaks more records, Adam Thielen becomes the first player in modern history to start a season with 5 straight 100-yard games and the Jets have 2 plays over 75 yards for the first time since 1972 when Joe Namath completed 2 long passes to Rich Caster.

On the other side we have Odell Beckham Jr. having a great game and trying to destroy the Giants in the same day with a bad interview. Just when people were starting to believe he had matured…

Moving into Week 6 we have New Orleans and Detroit on bye and more players hurt or just not playing well, so let’s get into some players that may be able to help your team moving forward.

But first here is a list of players I still would not drop for any of the following Waiver pickups.

Here are some players you can drop.

Eli Manning, QB New York Giants – Manning on the Giants’ offense is finally starting to show some life. As crazy as it sounds Manning has as many fantasy points over his last 3 games as Tom Brady does. He is averaging over 275 passing yards a game on the season and has thrown 5 TDs and only 2 INTs in his last 3 games. I will be the first to tell you that he is anything but a guarantee, but as we get deeper into bye weeks he is definitely in consideration for a bye week filler.

Baker Mayfield, QB Cleveland – After a rough first start against the Jets, Mayfield has bounced back and scored over 20 fantasy points in each of the last 2 games, including a big win against a tough Baltimore team in Week 5. In those two games he has thrown for an average of 318 yards and has thrown for 3 TDs, but also includes 3 INTs. He has some really nice matchups coming up including Tampa Bay, Pittsburgh, Atlanta and Kansas City, the 4 worst teams against opposing QBs.

C.J. Beathard, QB San Francisco – Beathard has thrown for an average of 324 yards in his two starts and has thrown for 2 TDs and 2 INTs in each game. Considering he is doing this with a depleted starting offense it is pretty amazing. He doesn’t have a great schedule ahead, but that may just play into his hands and give fantasy owners some nice garbage time production.

Devontae Booker, RB Denver – Booker finally saw some action in Week 5 with 5 receptions for 59 yards on six targets. It’s hard to think this will become a thing, more likely this was just because Denver was playing from behind and fighting to get back in the game. Temper expectations for him going forward.

Wendall Smallwood, RB Philadelphia – If there is a chance that Smallwood is still available in your league he is worth a shot, but this will continue to be either a timeshare between him and Clement or a committee once Darren Sproles comes back. Also, there are rumors that Philly is reaching out to the Bills to try and trade for LeSean McCoy. Hard to count on Smallwood with all this going on.

Kyle Juszczyk, RB San Francisco – Juszczyk is a very good fullback who has always shown the ability to catch passes and now with Matt Breida looking to miss multiple weeks with a bad ankle sprain he should see an uptick in usage in the passing game. By now we all know Beathard likes to check down to his backs and Alfred Morris is not really known as a pass catching back, so most of that work should go to Juszczyk until Breida comes back.

Jamaal Charles, RB Jacksonville – In what could be a short term fix or an indictment of Fournette’s injury and his chances of coming back, the Jaguars went out and signed Jamaal Charles. We all know that Charles was once one of the greatest running backs in the game, but last year in Denver he only averaged 30 yards a game and had 1 touchdown in 14 games. It’s hard to think he will resurrected in Jacksonville.

D’Onta Foreman, RB Houston – Foreman is currently expected to return from the PUP list when first eligible in Week 7. It may take him a couple of games to round into shape, but with the lack of a running game in Houston, could be called into service pretty quickly. If he has any kind of a decent showing he will take over this backfield.

Ryan Grant, WR Indianapolis – He is not going to ever win you any games on his own, but Grant has very quietly put up double-digit scores in 4 of 5 games. He is averaging just over 6 targets, just under 5 receptions and right about 50 yards a game. If he is still available in PPR leagues, it is time to stash him on your bench and then as we get deeper into bye weeks he will be able to fill that WR3 or flex spot when needed.

Robby Anderson, WR New York Jets – So there is life in Anderson after all, but let’s not get crazy. He scored two touchdowns in this game, including a 76-yarder when he blew past the defense and Darnold hit him in stride. He followed that up with another beautiful pass on a 35-yard score. Unfortunately, he only caught one other pass all game. Hopefully this is the beginning of the comeback of Anderson.

Tre’Quan Smith, WR New Orleans – With Ted Ginn Jr. out in Week 5 Tre’Quan got a chance to shine, including catching the pass that gave Drew Brees the overall pass yardage record. Smith finished the night with 3 receptions for 111 yards and 2 touchdowns on 3 targets. Early indications are that Ginn should be back in Week 6 and if he does Smith goes back to being a rookie with good long term prospects, but not much value short term. If Ginn suffers a setback and doesn’t go them Smith should get another chance.

Trent Taylor, WR San Francisco – Taylor was the beneficiary of Marquise Goodwin missing Week 5 as he caught 7 passes for 61 yards and a touchdown. If Goodwin continues to miss time Taylor will see more games along these lines. Garcon is not fully healthy either and Beathard has to throw to someone.

Donte Moncrief, WR Jacksonville – Moncrief has had double digit scores in 3 of the last 4 games. Of course, the one he didn’t was a big stinker of 2 receptions for 16 yards and I am sure there are more of these coming, but he has 185 yards and a touchdown on 20 targets the last 2 weeks. The big term these days is Air Yards and while I have yet to figure out it really helps us, if you believe in them then Moncrief leads the team in air yards over the last 3 games. He has 263, almost 100 over Keelan Cole and 130 over Dede Westbrook.

Willie Snead, WR Baltimore – Snead is another forgotten receiver who has quietly had double digit scores in 4 of 5 games. Like Ryan Grant above, he doesn’t have a high ceiling, but he does have a pretty sure floor and makes a very good bench stash heading into the heavy bye weeks.

Austin Hooper, TE Atlanta – There is life in Hooper, but will it continue? He was very much involved as Matt Ryan tried to claw Atlanta into this game. He caught 9 passes for 77 yards on 12 targets in Week 5. The problem is that he only had 15 targets in his other 4 games. Hopefully Ryan realizes he has another weapon in Hooper and continues to use him, but it does carry risk.

Niles Paul, TE Jacksonville – Paul took advantage of Austin Seferian-Jenkins being put on IR early in the week. He ended up catching 7 passes for 65 yards on 9 targets. He was helped by Jacksonville playing from behind and he will be hard to count on every week, but he might be in play during heavy bye weeks.

Erik Swoope, TE Indianapolis – Playing opposite Ebron while Jack Doyle remains out, Swoope finally got in the box score. He only caught 3 passes for 44 yards, but he added a touchdown to get him into double digits. He was also very close to adding another TD in this one but was dropped at the one. Hard to count on, but we are seeing Indy run a 12 offense a lot and he does have a little value as long as Doyle is out of the lineup.

Geoff Swaim, TE Dallas – Swaim has been the ninth-best TE in PPR leagues the last 3 weeks. He has 15 targets and has averaged just over 10 points in those games. That’s how far the TE position has fallen these days. He will have bad weeks as this offense is still struggling, but hopefully Prescott continues to build up trust in Swaim.

That’s it for this week folks. Good luck with your waiver wire runs and your teams in Week 6.