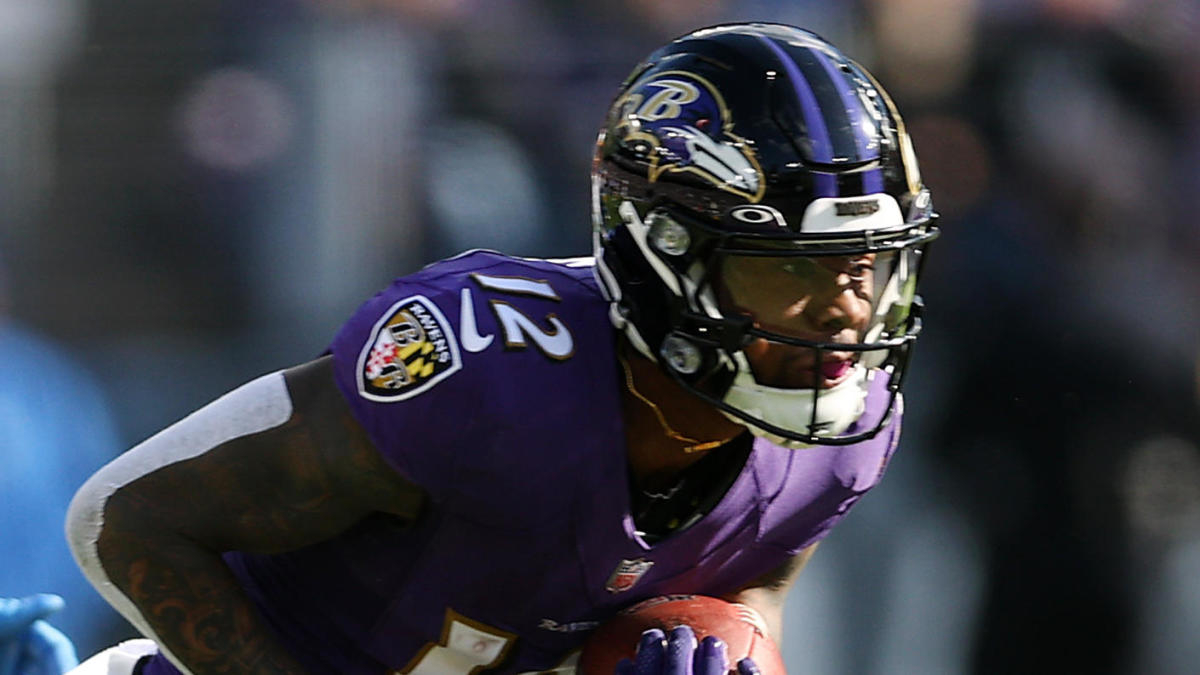 We’ve made it a third of the way through the season, but this week is going to be tough! Six teams are on bye, including the Bills, Chargers, Cowboys, Jaguars, Steelers, and Vikings. With so many teams out, you’ll need to dig deep to find the values to differentiate your lineup. Let’s dig in and look at some potential bargain plays for the Week 7 slate. 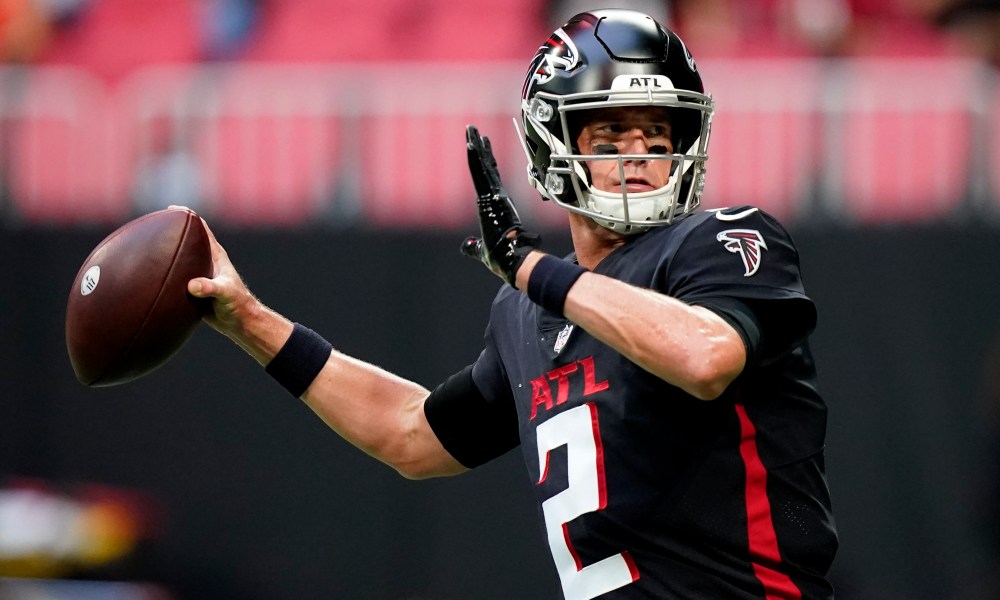 Although he started the season poorly in Week 1, Matt Ryan has managed to right the ship, throwing for eight touchdowns over the past three games. He’s also done a good job of protecting the ball, only throwing for three interceptions on the year. This week, he’ll meet up with the Miami Dolphins, who are ranked 23rd against the quarterback position and are giving up 21 fantasy points a game. Ryan will also have Calvin Ridley back, giving him another weapon along with Kyle Pitts and Cordarelle Patterson. It may not be a pretty game to watch, but with a salary of $5,700, Ryan could leave you with some cap space to pay up for a stud elsewhere and should return at least four times value. 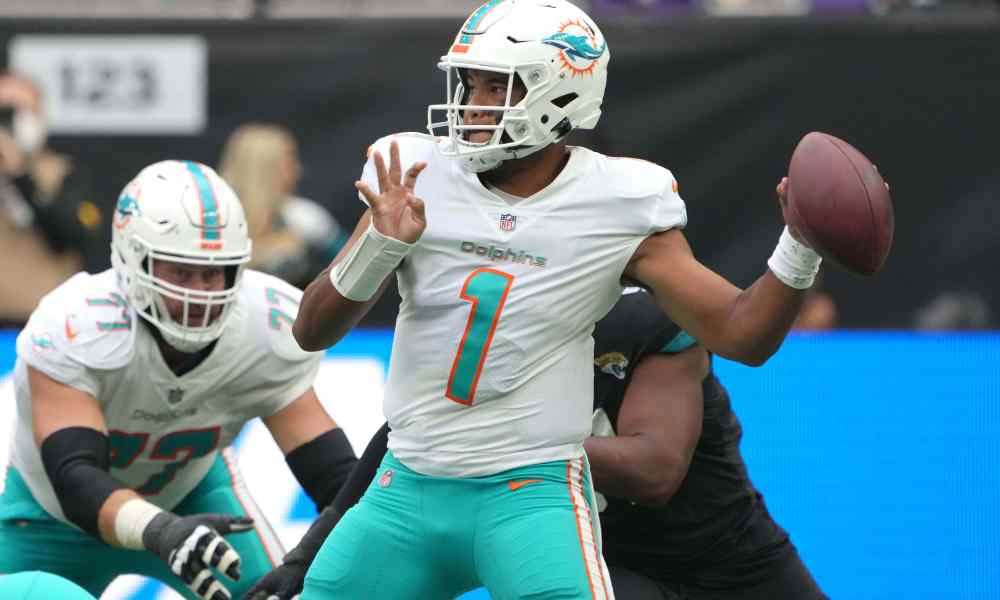 Well, it looks like this week our two quarterback values are coming from the same game, but with a matchup like this, it’s hard to say no. In his first week back from injured reserve, Tua Tagovailoa passed for 329 yards, two touchdowns, and rushed for an additional 22. Yes, that game was against the Jacksonville Jaguars, but, if you can believe it, the Atlanta Falcons are even worse than they are against the quarterback position. This season, the Falcons are ranked 28th, giving up 22.1 fantasy points per game to the position. Much like Matt Ryan, Tua should be getting some of his weapons back, including DeVante Parker. This game should be a shootout and be a fantasy point gold mine!

Allen Robinson hasn’t been the WR1 he’s been in previous years, but last week was an encouraging sign that he’s building a rapport with rookie quarterback Justin Fields. The Packers built a quick lead which forced Fields to throw in the second half, and Robinson saw 28% of the team’s total targets in Week 6. The same should happen this week against a Tampa Bay offense that should run the score up quickly. Tampa Bay’s defense is also 5th-worst in the league against the wide receiver position, giving up 41.35 points per game. Robinson is primed for a big fantasy day on Sunday.

Robby Anderson has been a huge disappointment to fantasy managers this year, but that could all change this week against a New York Giants defense that is allowing 38.55 points per game to the wide receiver position. It’s not like Anderson isn’t getting the looks from Sam Darnold. Over the past three weeks, Anderson saw a combined 29 targets. The looks are there; he just hasn’t caught them. He’s also playing on 86% of the offensive snaps, and if the Giants place James Bradberry on DJ Moore, Anderson could exploit a matchup with Adoree’ Jackson. If he can get rid of his case of the drops, Anderson has a high ceiling that could win you some cash this week. 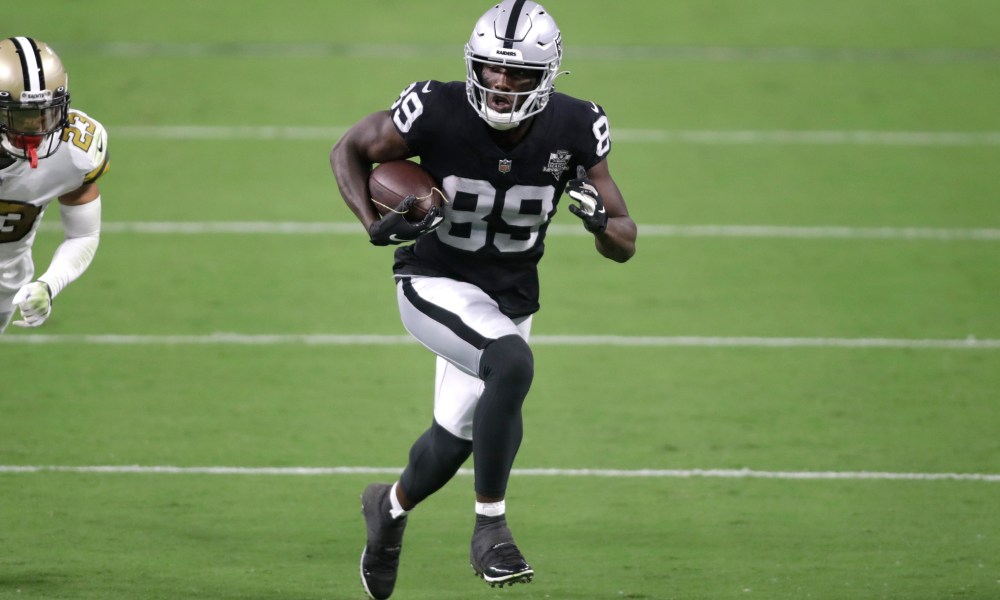 Bryan Edwards has seen a modest target share so far this season, but his explosive speed has allowed him to gain yardage on those targets. Last week against Denver he racked up 67 yards on two receptions! This week, the Las Vegas Raiders are going against a good Philadelphia Eagles pass defense, but as Darius Slay should shadow Henry Ruggs III, Edwards could be open for target share opportunity. Even if he doesn’t get the targets, he’ll return value with the ones he gets because of his elusive speed. 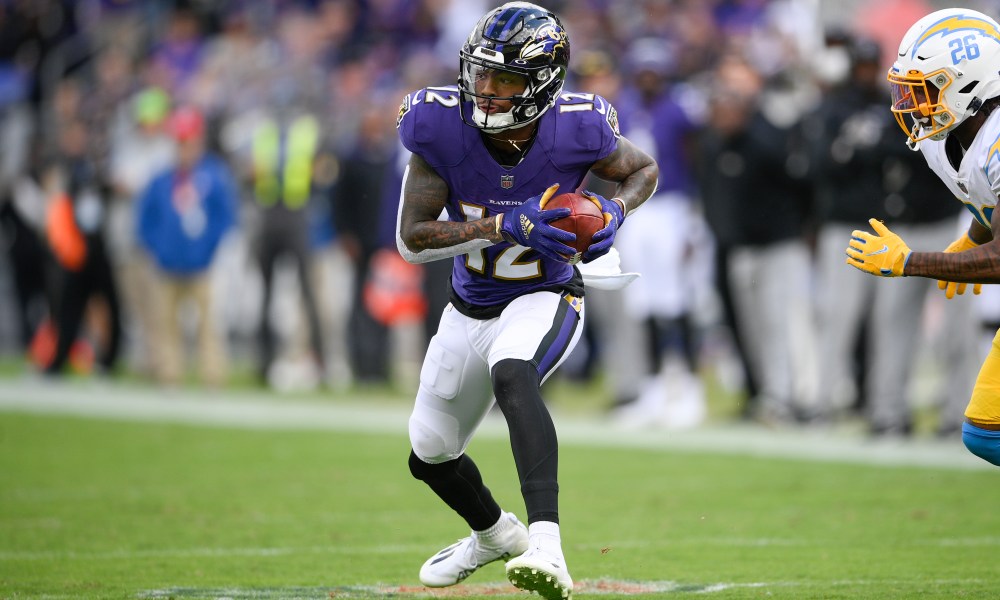 Rashod Bateman was talked up during the off-season, but when he went to injured reserve with a groin injury, he was largely forgotten about. Last week, he made his presence known. He tied for the team lead in targets with Mark Andrews, catching four of six for 29 yards. That’s a 22% target share in his first week off injured reserve. This bodes well for his ceiling going forward, as the Ravens said they were going to work him back in slowly. This week, they face the Cincinnati Bengals who are allowing 37.07 points per game against wide receivers. At $3,400, Bateman is an absolute STEAL. 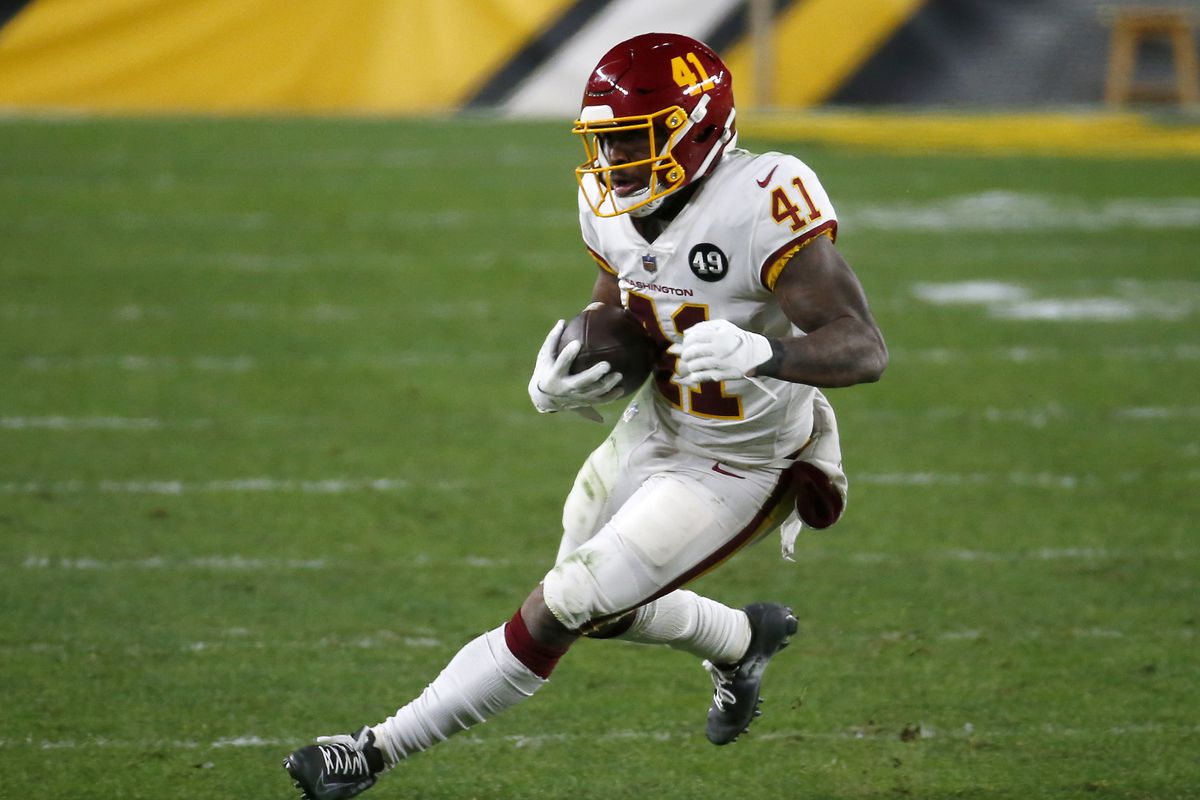 Antonio Gibson began this week without practicing, opening the door for J.D. McKissic to take the reins on lead running back duties. After Gibson went out last week with an injury, McKissic logged 110 yards on 16 touches, eight of which were passes (hello, PPR gold!). This week, he’ll face a Green Bay Packers defense that is giving up 24.15 points per game to opposing running backs. While we should still see a little Jaret Patterson in the mix, it’s McKissic’s backfield as long as Gibson is out.

It’s always a mystery trying to decide which New England running back to play, but with Damien Harris still banged up, Rhamondre Stevenson should have a large role this week. He only played 33% of the snaps last week against the Dallas Cowboys, but he put up 23 yards on five attempts and found the end zone. This week, the Patriots are facing the Jets, whose defense has been single-ply thin against the run. They are allowing 32.84 fantasy points per game to the opposing running backs, worst in the league. With Harris still battling through some rib issues and New England expected to run the score up fast, I see Stevenson being used often and putting up some big numbers this week.

The Philadelphia Eagles shocked pretty much everyone last week when they traded Zach Ertz to the Arizona Cardinals the day after he scored a touchdown in their Thursday night game. This week, along with getting to move across the country, he’ll face a Texans defense that is allowing 18.97 fantasy points per game to the tight end position. I know there is some concern that they may ease him in since he’s still learning the playbook, but Ertz is a vet who has been in this league a long time. Plus, they are woefully thin at the position, giving Ertz the opportunity to be an immediate starter. We’ve discussed this a lot throughout the season, but the tight end position is kind of a crapshoot from week to week, so I’d rather pay down here to get a stud you know will deliver at another one. Ertz should be a solid play for you here this week. 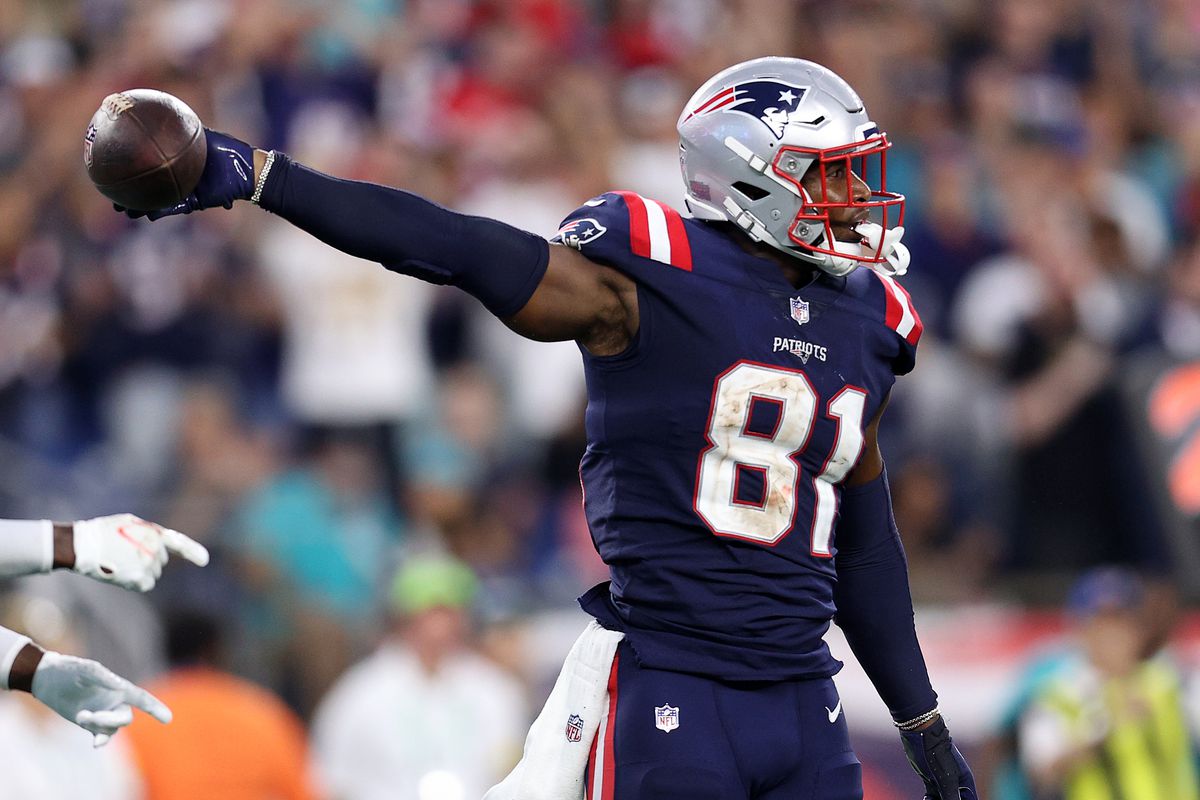 I guess the question of who the number one tight end in New England was answered over the past few weeks; it’s Hunter Henry. Jonnu Smith has been relegated to a largely blocking role, despite playing 72% of the snaps last week. However, I think that changes this week. We covered earlier that the Jets are really bad against the run, but they’re surprisingly GOOD against the wide receiver position. They’re only allowing 26.4 fantasy points per game to opposing receivers, good for 2nd best in the league. They’re a little softer against the tight end, which is why I think New England utilizes lots of 12 personnel schemes and finally gives Jonnu the targets they paid him $50 million to get.