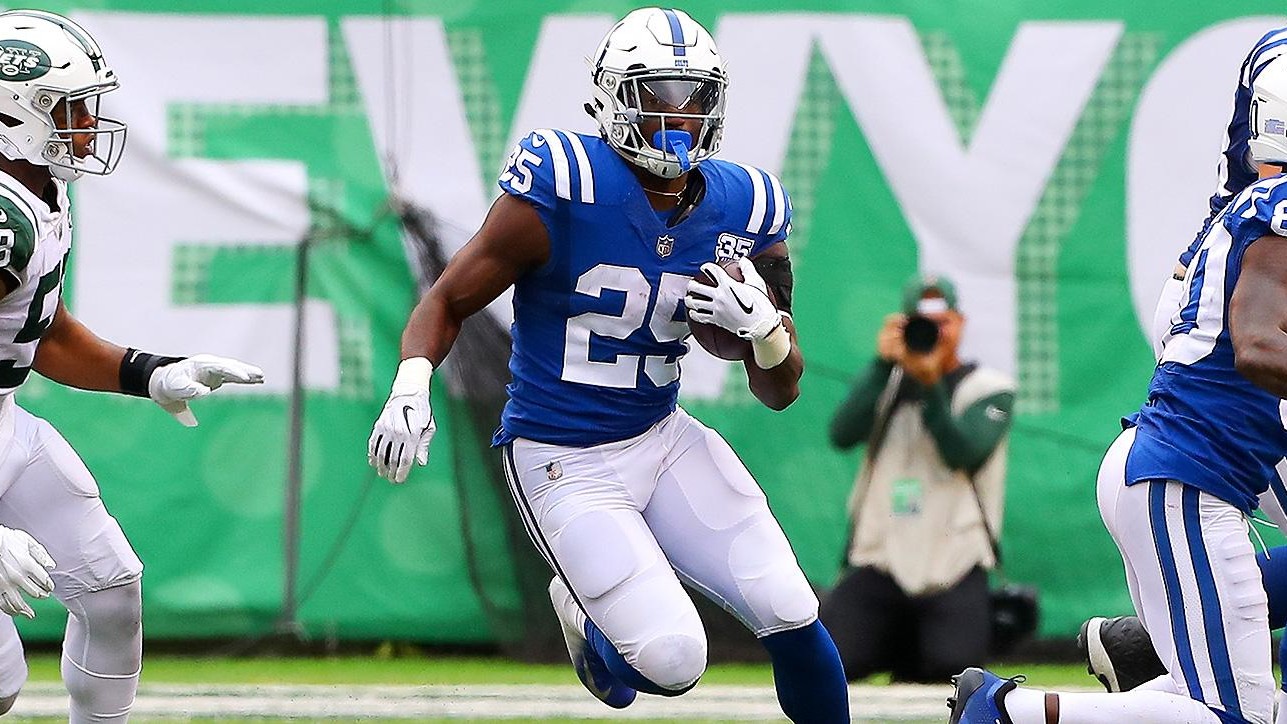 What a crazy week(end) in football!

It kicked off with Carlos Hyde getting traded to the Jags and ended with Amari Cooper getting shipped off to the Cowboys. We had a few injuries mixed in there as well with Marshawn Lynch being placed on IR, Sony Michel going down with a scary knee injury, and to the joy of Jacksonville fans, we also saw Blake Bortles benched in favor of Cody Kessler. Whew!

With those trades and injuries, that could provide an opportunity for players to step up and become fantasy relevant. With waiver wires set to run over the next day or two, let's take a peek and see who may benefit from those moves and help your fantasy team.

Before we start with that, let's look at some players I would feel comfortable dropping and a few I'm not ready to cut bait with.

Here are some players I would drop:

Here are some players I'm not quite ready to drop:

Mitchell Trubisky, Bears - While he may not be the prettiest quarterback to watch in terms of being a "Real-life NFL quarterback", it's hard to deny Mitch Trubisky's fantasy performance. He's thrown for over 300 yards in each of his last three games and chipped in 11 passing touchdowns over that stretch. Not only that, but he's averaged over 80 rushing yards PER GAME in his last three, and that's making him a fantasy stud. He has the Jets coming up in Week 8 whose defense is 21st in the league against the pass, so he should be able to do it again next Sunday.

While there have been some rough patches in the road, brighter days are ahead for Baker Mayfield.

Baker Mayfield, Browns -  I think the rookie Baker Mayfield is about to take off. Yes, he's had his ups and downs during his rookie season with the Browns, but he's shown me enough that I think he will only continue to improve. He also has an upcoming schedule that makes me drool, as the next three weeks he takes on the Steelers (27th ranked pass defense), the Chiefs (31st ranked pass defense), and the Falcons (30th ranked pass defense). Those rankings are in pass yards per game by the way. For a little added gravy, the Browns go into overtime every game, so he has extra opportunity to rack up those fantasy points!

Dak Prescott, Cowboys - While he has yet to hit the 300 yard passing mark on the season, Dak Prescott adds a nice fantasy floor with his rushing ability. He's rushed for 34/82/33 yards in his last three games and added two rushing touchdowns in those games. Jerr-uh just traded for Amari Cooper, so while Zeke will still get a lot of touches, I think this offense will try to get kickstarted by trying out their new toy. Dallas has a bye this week, and that makes it a little more difficult to stash Dak on most rosters, but I think we see a better Dak Prescott in the second half of the season.

Alex Smith, Redskins - While I don't necessarily like Alex Smith as a fantasy quarterback, if your team is desperate, he has a cake schedule coming up as the Redskins take on the Giants, Falcons, and Buccaneers. He's a relatively safe fantasy quarterback without the upside of some, but he should be able to provide some decent value and a solid floor over the next three weeks.

Marlon Mack, Colts - It didn't take Marlon Mack long to work his way into the Colts running back rotation. After two weeks, Mack is the clear lead-dog in the backfield and he added some links to that leash this week as he rushed for 126 yards and touchdown (he also added 33 receiving yards and another touchdown) against the Bills in Week 7. While I don't expect huge receiving numbers from him on a regular basis, this Colts offense has looked really good to start the season and Mack looks like he will be a key part of it. He's owned in 53% of leagues on ESPN, and I expect that to go up dramatically after this week's waiver run.

Don't follow the herd...pick up Jalen Richard before you look at Doug Martin.

Jalen Richard, Raiders - The Raiders suck. The reason I say that is because while everyone seems to be rushing out to pick up Doug Martin to serve as Marshawn Lynch's replacement, I think Jalen Richard will have more fantasy value, particularly in PPR leagues. Gruden has shipped off Amari Cooper to the Cowboys, and that may be only the first of more moves to come, so I can see them playing from behind in most games. That's where Jalen Richard comes in, as he is a much better third-down/receiving back and that should have much more value in this offense. Plus, Doug Martin isn't that great of a runner, so I think Richard picks up more work in the running game as well. Don't be fooled by those touting the "Muscle Hamster"...Richard is the back to own in Oakland.

LeGarrette Blount, Lions - Even though it pisses off Lions fans (myself included), LeGarrette Blount's role in the Detroit offense isn't going away. He's had double digit rushing attempts in the last two games and his nose for the end zone has earned him three rushing touchdowns in those games. You can bitch about it all you want, but LeGarrette Blount is here to stay.

Doug Martin, Raiders - While I mentioned earlier I'm not a huge fan of Doug Martin, there is no denying he should get a huge bump in volume with Marshawn Lynch being placed on Injured Reserve. Volume plays an important role in fantasy football, so while I don't expect a plethora of huge games from him, he could be a decent back to have at the end of your roster while we navigate bye season.

Kenjon Barner, Patriots - It appears that fantasy owners dodged a bullet as Sony Michel avoided any structural damage to his knee and is listed as week to week on the injury report. Barner had ten carries for 36 yards in relief duty this past week, but I'm not sure I trust him enough to play him in the week or two that Michel could miss.

Others to consider in Deeper Leagues

Tell me the truth, you forgot about Geronimo Allison, didn't you?

Geronimo Allison, Packers - I feel like people have forgotten about Geronimo Allison as the Packers had a bye last week and he had missed the previous two weeks due to a hamstring injury. However, before the injury, Allsion had solidified himself as Aaron Rodgers' number two option in that offense. He averaged over seven targets per week through the first four weeks and was a top 40 fantasy wide receiver. He should return this week, and while Marquez Valdes-Scantling has performed well in their last two games, he should return to the limited role in the offense that he had prior to Allison's injury.

Chris Godwin, Buccaneers - While he still hasn't had that "Breakout" game, Chris Godwin has been a very solid fantasy producer. He's hit double digit fantasy points (PPR) in five of his six games, and has now out-snapped Desean Jackson in two straight games. I think he will continue to improve and could be a solid WR3 in the second half of the season.

Tyrell Williams, Chargers - I'll admit it...I didn't think Tyrell Williams would repeat and have another good game in Week 7. I was wrong. He followed up is 3/118/2 Week 6 performance against the Browns with a 2/118/1 outing against the Titans in London. While I think he is more susceptible to the weeks where he lays an egg, it looks like he should be the wide receiver with the last name of
"Williams" that you should own from the Chargers. Sorry, Mike.

Courtland Sutton, Broncos - The rumors are now starting to swirl that the Broncos may look to shop Demaryius Thomas. If he is indeed moved, that would immediately put Courtland Sutton in the WR3 conversation with upside for even higher. He's already on the field for 70% of the team's snaps and has two scores in his last three games, and he could see a dramatic increase in targets if Thomas is traded.

Confidence Level - 2 (2 Currently, but if Demaryius Thomas is moved, his confidence level rises to 7)

Martavis Bryant, Raiders - If there is a winner in the Amari Cooper trade, it may be Martavis Bryant. He played in a season high 72% of the team's snaps in Week 6 and should see an uptick in looks with Cooper in Dallas. He's a risky player, but could put up a few really good weeks over the second half of the season.

DeVante Parker/Danny Amendola/Jakeem Grant, Dolphins - This week the Dolphins lost Albert Wilson to a potential season-ending hip injury and Kenny Stills has already been ruled out for next week's game due to a groin injury. DeVante Parker has been in the team's doghouse as well as dealing with some injuries, but could see a lot of work out of necessity. Danny Amendola is probably the safest of the three if you value consistency, and Jakeem Grant is the true wildcard in this offense. Personally, I would rank them Parker, Amendola, and then Grant, but if you like to play it safe, Amendola may be the best option for you.

Vance McDonald, Steelers. McDonald found himself on many waiver wires this past week due to the Steelers being on a bye, but the position is a fantasy wasteland this year, and he should be atop of your list to add if you need a tight end this week. He has five or more targets in five of his six games played this season and seems to have a nice rapport with Ben Roethlisberger. James James held down the fort admirably while McDonald was out to start the season, but Vance is the Steelers tight end you need to own.

Jack Doyle, Colts - Doyle is getting closer to return and should re-assume a decent sized role in a good offense.

Maybe it was because it was a "Revenge game", but Ben Watson was a nice fantasy producer in Week 7 against the Ravens.

Benjamin Watson, Saints - Ben Watson finally found the end zone in Week 6, as he caught six balls for 43 yards and the aforementioned score against his former team, the Ravens. Watson finished tied for second on the team with six targets and maybe he's going to be a beneficiary of Ted Ginn's season ending injury.

CJ Uzomah, Bengals. He's not getting the targets that I would like, but in the three games since the Bengals lost Tyler Eifert, Uzomah has been on the field for a minimum of 92% of team snaps every game. He found the end zone in Week 7 against Kansas City, so he may be worth a flier if you are desperate at the position.