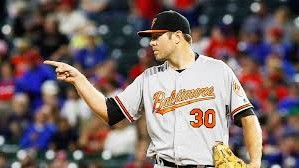 Happy Mother’s Day weekend to all of the mothers out there, you truly do the hardest job in the world that includes no breaks, and you never get to retire from it. I know I love my mother and all that she has done, and continues to do for me. That being said, while you are spoiling your mother, you still can’t forget about your fantasy baseball team! PRIORITIES! Are you in a close matchup this week and either need a win to put you over the top, or need to catch your opponent by a small margin in points? If you are looking to pick up a pitcher for the weekend to put you over the top, below are two options for each day that I believe will help you get over that hump!

Chris Tillman, Baltimore Orioles vs. Danny Duffy (KC).The Royals have been a disaster this season, and have one of the worst records in baseball. They are due to improve at some point, but right now their offense is a mess! Duffy also has given up six earned runs in two of his last three starts, and the Orioles bats have woken up this week. This will be Tillman’s second start since returning from injury. He was solid his first time out, and although he isn’t going to get you a boatload of strikeouts, I think he will pitch well, not hurt your ERA/WHIP, and pick you up a win. I can't believe the start that Mike Leake is off to. Why not continue to ride the hot hand against the Cubs?

Mike Leake, St. Louis Cardinals vs. Eddie Butler (CHC). I have to admit that I am very surprised by the start Mike Leake has had. I also think that he is pitching over his capabilities. However, I am going to continue to ride this wave until it crashes for streaming purposes. The Cubs are pulling Butler out of the Minors for his first start this year. Although he has been very good at AAA, his prior experience in Colorado was no bueno. The Chicago offense still hasn’t been as dominant as we expected coming into the year. I am a little nervous on this pick, but I think Leake is going to be successful on Friday.

Alex Wood, Los Angeles Dodgers vs. Jordan Lyles (COL). Since returning from the Disabled List, Wood has been very good two of the three times he has taken the mound. His last time out he struck out 11 in five innings while allowing just two hits. Wood is a quality pitcher who can get you seven strikeouts or more in a start. The Rockies have been a powerful offense for sure, but their starting pitcher on Saturday has been in the bullpen and proven he shouldn’t be in the Majors. Wood might give up a couple of runs, but I see him picking up the win and getting 6+ strikeouts.

Daniel Norris, Detroit Tigers vs. Ricky Nolasco (LAA). Norris hasn’t been great in three of his last four starts, but this one comes down to the matchup. Have you seen the Angels lineup lately? And I wouldn’t be surprised if they are still without Mike Trout on Saturday. They barely have three Major League level hitters on this team. And don’t get me started on Ricky Nolasco! He has been decent a few times recently, but most of them have been against the offense-challenged Oakland A’s. This is a great opportunity for Norris to get well. He might need a haircut wicked bad, but A.J. Griffin looks like he will keep his hot start going on Sunday

A.J. Griffin, Texas Rangers vs. Sean Manaea (OAK). Griffin has mostly been a very effective pitcher when he has been healthy, but it seems every year he hits the DL at least once. He pitched a shutout his last start and has allowed two total runs in his last three starts combined. He goes against Oakland who we know isn’t a great offensive team, and Sean Manaea who I like, but is making his first start since coming off of the DL. This looks like it should be a great day to use Griffin.

Trevor Bauer, Cleveland Indians vs. Hector Santiago (MIN). I’ll be the first to admit that Bauer hasn’t been good this year to this point. However, Sunday is loaded with a lot of pitchers who are owned in well over 50% of leagues or that probably shouldn’t be in the Majors. What I am saying is that my selections were limited. Bauer has the talent to do well and strike a good number of hitters out. His best start of the season this year came against the Twins when he allowed only two runs, so if you are desperate for a pitcher, Bauer might be able to pull a good one out on Mother’s Day.