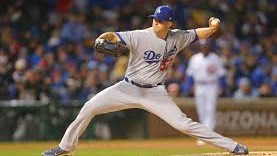 As we get close to the end of another fantasy baseball week, I know a lot of you are suffering over your matchup. You need one more win, a tenth of a point less of ERA or WHIP, or a few more strikeouts. Each week, we here at Fighting Chance give you a couple of options that are owned in less than 50% of leagues for each weekend day to try to put you over the top in your weekly matchups. As always you can find me on Twitter @fightingchance and please Like the Fighting Chance Fantasy Facebook page. Nate Karns got fantasy owners attention last week, he looks to hold that attention this weekend

Nate Karns, Kansas City Royals vs. Hector Santiago (MIN). Karns was fantastic last week with two great starts with double digit strikeouts. He always had a bit of an upside with whiff potential so this isn’t completely out of nowhere. He faces off against the Twins who have scored the third fewest runs in the American League. Santiago pitched to a near 5.00 ERA last year, and although he hasn’t been bad this year he was shelled last time out. This looks like a great spot for Karns.

Alex Wood, Los Angeles Dodgers vs. Justin Nicolino (MIA). Nicolino isn’t a good pitcher right off the bat, and the Marlins are in the bottom third of runs scored in the National League. Add that together with Wood being great lately and this looks like a great opportunity. Wood has not given up a run in three of his last four starts and struck out eight or more in three of those as well. If you are looking to stream a pitcher, Wood is a great choice. Zack Wheeler might not be pitching in late August, but he looks like a solid start on Saturday

Zack Wheeler, New York Mets vs. Alex Meyer (LAA). Wheeler is definitely on an innings limit this year, but there’s no reason to worry about that now. He has been fairly solid so far, allowing just one run in four of his last five trips to the mound. You worry about him getting run support with the Mets woes lately, but he should be good. Alex Meyer was great his last time out, but his ERA still sits at over 5.50 so I think Wheeler should have a good day on Saturday.

Sean Manaea, Oakland Athletics vs. Drew Pomeranz (BOS). Going against the Red Sox normally isn’t a recipe for success, but Boston hasn’t been the offensive juggernaut we expected quite yet. Manaea will be making his second start since returning from injury, and while he walked too many guys, he still had a lot of strikeouts and even if he doesn’t give you a spectacular start on Saturday he should at least pad your strikeout numbers.

Kyle Freeland, Colorado Rockies vs. Bronson Arroyo (CIN). I would probably pick your mom if she was pitching against Bronson Arroyo. Not only has he sucked most of his entire career, he has been extra bad this year with an ERA over 6.00. Kyle Freeland isn’t a major strikeout pitcher, but he has been very good this year. He hasn’t given up more than three earned runs in a start since April 12th and the Rockies are the fifth highest scoring team in the National League. This looks like a slam dunk streaming opportunity.

Zack Godley, Arizona Diamondbacks vs. Clayton Richard (SD). I think Clayton Richard has a career ERA close to 700.5 and he has been equally ineffective this year. And only the Giants have scored fewer runs in the National League than San Diego. Godley has only allowed four earned runs total in his three starts this year and has struck out six or more in each of those three starts. Godley hasn’t been great throughout his career, but Sunday looks like a great day to start him.