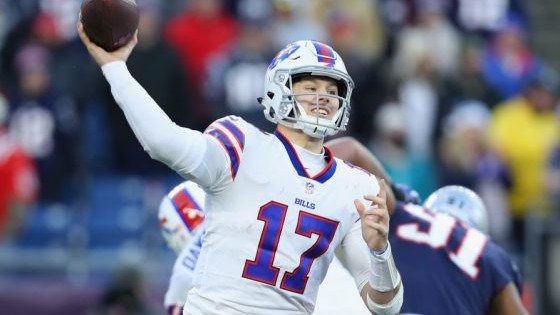 Why I Love Your NFL Team for Fantasy Football: The Buffalo Bills

The Buffalo Bills entered 2018 as the presumptive worst team in the league with the worst roster. Fortunately for the Bills they would not be the worst team, but would still end up with a top 10 pick in the 2019 draft. The 2018 season was a success was in large part due to a solid defense consisting of one of the league’s better defensive back groups and a solid defensive front.  However, on offense Buffalo put together a ramshackle group of pieces around rookie quarterback, Josh Allen. Former first round bust Kelvin Benjamin was the top wide receiver heading into the season and aging Lesean McCoy the primary running back. To make matters worse the team had one of the worst offensive lines due to losing a couple starters through retirement, the trade of Cordy Glenn to the Bengals, and just not having much talent. And yet, there was light at the end of the tunnel as the season progressed and Josh Allen flashed the athleticism that made him a first round pick. Now with a completely revamped offense, offensive line, and a second year quarterback, 2019 is looking like a year in which the hapless Bills could surprise many NFL fans and fantasy football owners.

First things first, the Bills GM Brandon Beane entered into the 2019 offseason with two areas he knew he was going to focus on: the offensive line, and the wide receiving corps. I’m a firm believer that offensive line play is one of the largest factors that is regularly overlooked when identifying which NFL teams can outproduce their fantasy ADP. Ending the season with one of the worst offensive line groups in the league led Brandon Beane to do whatever he could to upgrade the unit. He signed seven different linemen none of which are household names, but three starters and four backups. Mitch Morse, Ty Nsekhe, and Spencer Long will go a long way to shoring up the line to protect Josh Allen and hopefully improve on the terrible performances by the running back group (3.3 YPC). Then in the draft the Bills selected Cody Ford, Right Tackle from Oklahoma with the 38th overall pick. If you are a fantasy owner thinking of drafting Josh Allen in the same vein as a Lamar Jackson, the offensive line additions should be music to your ears.

In addition to the offensive line, Beane focused on restocking his wide receiving corps with the signing of slot man Cole Beasley, deep specialist John Brown, tight end Tyler Kroft, and the drafting of TE Dawson Knox.  This group joins the second year Robert Foster and third year Zay Jones, both of whom flashed at various times. Cole Beasley is the archetypal slot man with his small stature, quick speed, and toughness making catches over the middle. Over the past few years he was a safety valve for Dak Prescott and kind of a poor man’s Julian Edelman. Josh Allen struggled to throw short dump off passes last year and the hope is that Beasley can help the offensive efficiency by becoming a trusted quick read for Allen.

Conversely, Josh Allen loves to throw the deep ball and is believed to have the strongest arm in the league (second if you ask Pat Mahomes). The addition of veteran speedster John Brown is an attempt to increase Allen’s deep ball percentage by giving a trusted down field target. Brown has flashed at various points in his career, but just when he has started to get going he has either been plagued by injuries related to Sickle Cell or had a quarterback change such as in Baltimore last year.

And lastly for the pass catchers is the signing and drafting of Kroft and Knox which came after the Bills cut long time tight end Charles Clay. The Tomb Raider Tyler Kroft isn’t anything special as he never could put together a string of consistent games in Cincinnati despite frequently getting the opportunity with Tyler Eifert’s repeated injuries. Which brings us to Dawson Knox who has the measurables of a tight end, 6’4 254 pounds, but appears to be more of a project than a viable week 1 starter. A nagging foot injury to Kroft may find Knox in a starting role sooner rather than later, but he is nothing more than a deep dynasty stash or someone to monitor on dynasty waiver wires.

In the running back group the Bills added ageless Frank Gore, perennial back up TJ Yeldon, and rookie Devin Singletary (74th overall). Both Gore and Yeldon are signed to one- and two-year contracts respectively. Reports are that one of McCoy, Gore, or Yeldon will be cut, with Shady McCoy being the most likely due to having the highest salary. Gore has not seemed to lose his ability to blow through defensive lines as he somehow managed 4.6 yards per carry behind a suspect Miami Dolphins offensive line. Gore recently turned 36 and for the past six years the football world has been expecting him to retire or at least slow down. Maybe this will be the year. TJ Yeldon, on the other hand, has never lived up to his 36th overall draft capital and was quickly replaced by Leonard Fournette as the starter in Jacksonville. When given the starting opportunity, Yeldon has shown good pass-catching skills, but has never been one to overly impress with his average running ability.

Devin Singletary is one of the most exciting prospects in this year’s rookie running back class because of what he was able to accomplish while at Florida Atlantic. Despite running behind arguably one of the worst offensive lines in college football he managed to break every rushing record that FAU had including both single season and career totals in yardage and touchdowns. He is likened in skill set to Lesean McCoy due to his ability to start and stop on a dime and make defenders miss. According to Pro Football Focus, Singletary had 96 missed tackles last year which was second highest in the country on his way to rushing for 22 touchdowns on 261 carries for 1348 yards.  With Singletary behind the aged veterans of McCoy, Gore, and TJ Yeldon, it appears sooner rather than later that Singletary will get his shot to be the main back in Buffalo.

Why I’m So Excited

Over the final six weeks of the season Josh Allen finished as the number two fantasy quarterback. Number two! Obviously, this was not because he transformed into Patrick Mahomes, but instead he ran for more than 95 yards in four of those weeks while scoring five rushing touchdowns. He was one yard shy of rushing for 100 or more in three straight games. Additionally, he threw for at least 206 yards in each of those games with a combined seven touchdowns. Yes, those passing numbers leave much room for improvement, especially given the seven interceptions during the same span, but this entire offseason has been about surrounding Allen with the players necessary to make him thrive.

Currently being drafted as the QB22 at the end of the 13th round, Josh Allen’s upside makes him a late round quarterback with the highest likelihood of finishing inside the top 12. In a one quarterback league I see no reason why Josh Allen couldn’t be your teams QB1 given the available options on the waiver wire should Allen’s wheels fall off. In a season where he only started 11 games, came in off the bench for one, and left one early due to injury, he threw for 2074 yards, 10 touchdowns, and 12 interceptions. If he can get above 3000 or 3500 yards with a weekly rushing floor of 30 yards (7 of 12 games) in addition to the explosive rushing games, I see no reason why Allen can’t easily find a path to being a starting quarterback on fantasy rosters.

As discussed above the Bills brought in Cole Beasley and John Brown to make Allen a more efficient and effective passers, but towards the end of last season he started to develop chemistry with both Zay Jones and particularly with Robert Foster. Last year was Zay Jones’ second year of a career marred by drops and a terrible catch percentage: 36.5% on 74 targets in 2017 and 54.9% on 102 targets in 2018. But as Allen became more productive so did Jones. Over the final seven games Jones had seven touchdowns with four games over 67 yards. Not great numbers, but a much better ending to his season and indicative of a growing connection with the rookie quarterback. Zay is currently going undrafted or outside the top 67 wide receivers on fantasyfootballcalculator.com. It is understandable that he isn’t being drafted based on the lack of production except for a few weeks towards the end of the season. However, he will be someone I am closely watching the first couple weeks of the season to see if 2018’s ending was a fluke or the real deal.

Even better than Zay’s end of year production was UDFA Robert Foster out of Alabama. His season represented two of the most polar opposite halves a player could have. After going undrafted he was subsequently released in September and then resigned in November. Upon his return he ended up having four of the final seven games with over 94 yards and a total of three touchdowns. According to Kate Magzdiuk of the Ball Blast Podcast, during this same span Foster was: the best wide receiver in fantasy points per touch; 2nd in yards per reception; 4th in yards per routes run; and, 4th in pass rating when targeted. Josh Allen had a passer rating of 67.9 for the 2019 season, but when targeting Robert Foster it jumped to 127.2. However, this is a relatively small sample of games, and with training camps starting Foster is not currently running with the first team offense. The result of this news is Foster is not being drafted in the top 66 WRs. As one of the last picks in your draft Foster could be that bottom of the roster player that transforms into a WR3 or is easily cuttable after the first couple of weeks.

The most likely target from the wide receiver group will be John Brown given his name is more established than the rest of the group. In the 14th round at 177 overall Brown will be a poor man’s version of Desean Jackson. One thing Josh Allen loves to do is throw the ball deep and maybe John Brown can finally live up the hype he had in years past.

With regards to the running backs in Buffalo I am only interested in drafting Devin Singletary. Currently being drafted as RB53 in the 12th round I am happy to wait and see if he is able to take over the primary running back duties by mid season or earlier.  McCoy at RB41 in the 9th seems too pricey for little pay off. One strategy in McCoy’s favor is to hope that he is cut or traded to a team with a less murky backfield situation. However, even if this were to happen the tread on McCoy’s tires are not something I have any interest in having a part of. If you are interested in getting the cheapest piece possible of the Bills offense maybe look towards Frank Gore who is going undrafted. Maybe he can continue his over four yards per carry as a break-glass-in-case-of-emergency type back.

While most people view the Buffalo Bills as a fantasy wasteland, I choose to look at the cheap draft price of the various components and feel compelled to take fliers on a couple of them. Come draft day I’ll be looking at Allen, Singletary, and Brown or Foster toward the end of my drafts. If things continue on the same path (or better) as the second half of the 2018 season then they could all be total steals.