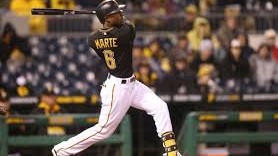 It is the last week before the All-Star Break and Fourth of July weekend, but that is no time to sit idle and forget about your fantasy baseball team. As I have said most of the season, if you aren’t constantly looking to improve your team someone else is. This week we have multiple options to help you in the outfield, as well as a few starters and a closer in waiting as well. You can always follow me on Twitter @fightingchance. Enjoy!

Starling Marte, OF, Pittsburgh Pirates. He was suspended early in the year for a PED violation, but that 80 game suspension is over soon. Somehow, he is still owned in less than 50% of leagues on ESPN. Marte’s suspension ends on July 18th, and he is going on a minor league rehab assignment now so if you are in one of these 50+% of leagues he is available in my God please move NOW! Marte has the chance to steal 30 bags in the second half of the year and pop a few homers to boot. He was a second or third round pick in March, and if you can add him for nothing right now DO IT!!!!! The latest in a rush of Yankee hitting prospects, Frazier is off to a great start and a must add in my book

Clint Frazier, OF, New York Yankees. A rash of injuries to the New York Yankees outfield has caused them to pick out of their Minor League system. They originally called Dustin Fowler, but one inning into his Major League career he suffered a season ending injury. After that they call up one of the crown jewels of their system in Clint Frazier. His batting average in the Minors wasn’t impressive at .256 but he already had 12 home runs and nine steals to go with 42 RBIs. The strikeout total is a bit high, but we are finding that with every player in 2017. It will be interesting to see how the playing time divvies out but Frazier homered and doubled in his first game so if he keeps hitting like this they will find a spot for him. I think he is a must add right away.

Randal Grichuk, OF, St. Louis Cardinals. Dexter Fowler is hurt right now and Grichuk is playing every day and making the most of it. He has three homers in the last week after returning from a Minor League banishment that the Cards sent him on. A similar thing happened to him last year when he was sent to the Minors and then had a solid second half. Again, with Tommy Pham, Stephen Piscotty, Fowler and Grichuk someone is going to have to sit, but I think it is going to be Pham who loses at-bats. Grichuk has the ability to hit 15-20 homers in the second half of the season, and if he can get regular at-bats he will have some good fantasy value.

Nick Williams, OF, Philadelphia Phillies. When Howie Kendrick went on the DL, Philadelphia called up one of their exciting prospects in Nick Williams. Like most young players, he is a very free swinger at the plate, but he does have some pop in his bat and that is what gets us excited. In 78 games at AAA, Williams had bashed 15 home runs and driven in 44 runs. He had struck out 90 times, and that concerns you about coming to the Majors. He is 4-11 so far but yet to hit his first home run. Sean Newcomb, SP, Atlanta Braves. Atlanta’s hot rookie has allowed just four earned runs in his four starts, and three of those came in the same outing. He has a 3:1 strikeout to walk ratio, and has whiffed 21 guys in 24 innings. Sure, the Braves aren’t a great offensive team, but right now Newcomb looks like the real deal. Any rookie will have ups and downs, but I like Newcomb a lot and have added him in any league I have been able to. You should definitely do the same too.

Dinelson Lamet, SP, San Diego Padres. After a couple of really rough outings shortly after his callup, Lamet has really been hitting his stride. Sure, he does walk a few too many hitters (which could lead to some runs, but damn it can he miss some bats! Lamet has struck out 50 hitters in 37 innings, and has a 3-2 record. If you own him you have to know that he is going to have some outings where he is going to get bombed, but right now he looks like a viable fantasy pitcher. At the very worst he will rack up the strikeouts for you.

Tommy Kahnle, RP, Chicago White Sox. David Robertson is going on Paternity Leave which is only going to be through Wednesday, but let’s be honest, the trading deadline is coming. We all know that the White Sox are going nowhere and they will be selling parts off before too long. Robertson should be a hot commodity when that happens. To me, Kahnle has the best stuff to take over that job. He has had a couple of bumps in the road recently, but for the year he has a WHIP under 1.00 and a 53:7 strikeout to walk ratio in just 31.1 innings. If you are looking to add a closer now for a payoff shortly down the road, think about Kahnle now.

Francis Martes, SP, Houston Astros. With the 80 game suspension handed down to David Paulino and the continued rash of injuries the pitching staff, it appears that Martes should be able to stay in the Majors a little longer. This add might be short term, and is more important for keeper leagues in case Martes is sent back down. He hasn’t been able to deep into games, but he has allowed just eight runs in his last four starts and struck out 21 over that span. He is one of the best pitching prospects in the Astros farm system, and the future is very bright for him. I’m hoping that starts now, but it is a bit of a roll of the dice.