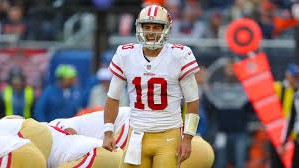 We are likely into the semifinals of your fantasy football leagues, or at worst we are now into the quarters. I really don’t think I need to still be mentioning guys like Dede Westbrook, Paul Richardson or Mike Davis. These guys are still available in more than 50% of leagues but they should have been on your radar a long time ago. As we went Week 15, here are some more that could help you.

Jimmy Garoppolo, QB, San Francisco 49ers. I am not going to lie to you. I’m a 49ers fan. However, that really has nothing to do with me putting Garoppolo here. I will admit that I have been watching the last two weeks fairly intently, and Jimmy G looks like he has been in Kyle Shanahan’s offense his whole career. He had a 300 yard passing game against the Texans, even though they aren’t nearly a good defense. The 49ers have Tennessee next week who I think they can move the ball on before finishing with tough matchups against the Jags and Rams. You shouldn’t need a quarterback at this point of the year, but if you do, Garoppolo is a great choice.

Marquise Goodwin, WR, San Francisco 49ers. The 49ers offense has become a real, big boy offense since they have put Jimmy Garoppolo under center. And you can’t argue with the fact that he has formed a rapport early with Goodwin. In the past three games he has 18 catches for nearly 300 yards and has turned himself into a must play. Goodwin is still owned in less than 50% of leagues, and if you play in one of those you should grab him ASAP. Rod Smith is hulking his way to a strong end to the season, and hopefully can help you win your fantasy football leagues.

Rod Smith, RB, Dallas Cowboys. Alfred Morris might be the lead back for the Cowboys, but they run the ball enough that there is still enough opportunity for Smith to have an impact. Not only that, but Morris is useless as a pass catcher, which makes Smith valuable in PPR leagues. He was a monster on Sunday and if you are in a dire spot this week needing a running back you can do worse than Rod Smith.

Theo Riddick, RB, Detroit Lions. The Lions made Ameer Abdullah a healthy scratch in Week 14, and that handed most of the reigns to Riddick. That being said, the Lions still aren’t much of a running team, and Matthew Stafford still threw the ball 44 times. Riddick is always involved in the passing game though, and even if he continues to only run the ball ten times like he did on Sunday, he will always have value in PPR league. He isn’t an awesome option, but it is Week 15, you aren’t going to be pulling Todd Gurley off the waiver wire here.

Corey Coleman, WR, Cleveland Browns. Coleman didn’t have a single catch in Week 13, but had a big game on Sunday where he had five catches including a touchdown against the Packers. The return of Josh Gordon gives someone else for opposing defenses to focus on, and that might mean more single coverage for Coleman. He is a very talented receiver who could help you in the last couple weeks of the season.

OJ Howard, TE, Tampa Bay Buccaneers. This one might be a bit of a long shot, but if you need a tight end at this point, I like Howard. He has had 50 receiving yards in three of his last four games, and has scored in two of his last four games. I’m a little worried that his targets might go down following a Week 14 fumble, but Howard is a freak of nature and I think will be very big in 2018. However, if you are somehow in desperate need for a tight end I like Howard better than a guy like Eric Ebron.

Kerwynn Williams, RB, Arizona Cardinals. This one isn’t a sexy one at all, but Adrian Peterson is out for the foreseeable future, which means that Williams will serve as the featured back. He has a combined 170 rushing yards over the past two weeks. Even though he is zero factor in the passing game, there aren’t a lot of starting running backs on the waiver wire at this point so if you are desperate for a runner, Williams could be your guy.