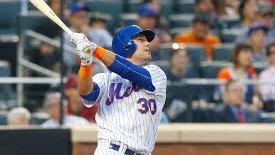 We are through the first month of the baseball season, and I know that many of you are already freaking out about your fantasy teams. Those who are in first place believe that you are destined to stay on top, and those of you in the basement are already giving up on the year. Neither of you are right, and if you aren’t trying to constantly improve your team, you will see your place in the standings fall. We have  Here are six options of players owned in less than 50% of leagues that can help you no matter what your need is. As always, follow me on Twitter @fightingchance.

Michael Conforto, OF, New York Mets. With Yoenis Cespedes due to miss a couple of weeks or more, Conforto is sure to have every day at bats for a while. And the way he is taking advantage of his opportunity, they may have a hard time not keeping him in the lineup when everyone is healthy. I have been kind of anti-Conforto this year because the lack of playing time he was due for, but the way things are looking, he may still be in for 500 at-bats. Either way he is worth stashing if nothing else and should be owned in more leagues than he is now. Kolten Wong is making the most of the opportunity that he got by crying like a baby about not getting playing time. I believe he can keep it up.

Kolten Wong, 2B, St. Louis Cardinals. Wong was absolutely dreadful for the Cards last year and had to be demoted to the Minors in 2016. He came into the season looking like a bench player, but he bitched in the Spring about being a part time player. Well, he has gotten the most out of his chance. He has a five game hitting streak, has driven in a couple of runs, stolen a couple of bases, and overall is performing well. It might be a good time to pick up Wong.

Scott Schebler, OF, Cincinnati Reds. No hitter is hotter than Schebler right now, and I think the power is legit. He has five mult-hit games in the last six, including five home runs and 11 RBIs. Clearly he can’t keep this pace up, but the guy is a masher. If power is your need I don’t think you need to look any farther than Schebler.

David Peralta, OF, Arizona Diamondbacks. I haven’t been a big fan of Peralta in his career, but Peralta is on a nice roll right now and could be a help to your team. He likely will never reach 20 home runs, or maybe hit 20 tops, but he can definitely help you with your batting average, and that’s not an easy stat to find help in. You should expect Peralta to hit .295 with 15 homers and steal 10 bases, and if that’s what you need he is your guy.

Hyun-Jin Ryu, SP, Los Angeles Dodgers. Ryu missed almost the entire last two seasons due to injury, but has come back in 2017 looking healthy. After a bit of a shaky start, he has been solid the This might be the most racist picture in the history of the Internet, but it made me laugh, so I went with it. If healthy, Ryu could be a fine contributor to your team.

last two times out and is starting to look like the guy from 2014-15. He has allowed just two earned runs over the last 11.1 innings, while walking four and striking out 12. The injury concern is still there, but if he is fine he could be a solid fourth starter for your fantasy team on a strong Dodgers squad.

Justin Wilson, RP, Detroit Tigers. K-Rod has blown two saves, has a fastball in the upper 80s, and an ERA over 6.00. Manager Brad Ausmus has said that a change is not imminent, but if you are looking to speculate on saves, Wilson might be your guy. He has an ERA well under 2.00, a WHIP around .50 and 17 strikeouts in 10.2 innings. It makes sense to give Wilson a chance, but Major League Managers don’t always use sense. Wilson might not close unless Rodriguez blows a few more, but he looks like the next guy in line.