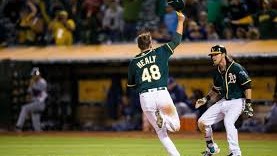 Every week people are in the need of players on the waiver wire. Whether it be due to injury or just terrible play, whether it be a hitter, a starting pitcher or a closer, the waiver wire is always your friend. As the calendar turns to June, here are six players that can help your team going forward.

Ryon Healy, 3B, Oakland Athletics. I’ve been on his bandwagon since the season started and I still can’t believe his ownership isn’t at 50% yet. Sure, he got off to not the best start in the world, but since the calendar turned to May, Healy has turned up the heat. This month he has hit .306 with six home runs and 14 RBIs. Now the batting average of May won’t keep up, but I think his season long batting average of .276 is attainable. Now is the time to grab a guy who has a real shot at hitting 25 dingers this season. A fantasy darling in March, David Dahl is getting close to his season debut, grab him quickly!

David Dahl, OF, Colorado Rockies. When trying to pick up an injured player who is on the way back, the best time is right before their rehab assignment starts. There has been no word on when that happens for Dahl, but it should be any day now. He had batting practice for two days a week ago, and there were no reports of setbacks. We were all drooling over him in March for his potential, and Gerardo Parra has played sucky enough that Dahl shouldn’t have to worry about getting playing time stolen from him. The kid has a really high ceiling so stash him now before it is too late.

Tommy Pham, OF, St. Louis Cardinals. Any time the Cardinals have had a hole in their outfield, Pham has usually filled it with pretty adequate play. With Stephen Piscotty dealing with a personal issue and Randal Grichuk sent to High-A ball to get his swing straight, the door has opened for Pham to get a nice run of playing time. If you do grab Pham, know that it likely isn’t for the rest of the year, but ride the hot streak while he is in there. He has two of his five home runs this week, and he is also good for a small handful of stolen bases as well.

German Marquez, SP, Colorado Rockies. We have long wondered if a pitcher that wears a Rockies jersey can consistently be productive. Jon Gray was the hope coming into the year, but it looks like Marquez might be that guy. Baseball America’s #5 prospect for the Rockies coming into the year, Marquez has  allowed just five earned runs in his last four starts, while striking out 22 in 24.2 innings. He has gotten in trouble with some walks in some contests, and had great control in others, so it is the consistency he still needs to harness. However, he is on a nice run lately, including shutting out the Cubs for eight innings earlier in the month. If you are looking for a pitcher, I think Marquez is a great option. Joe Ross, SP, Washington Nationals. The Nats seem to have a problem with Joe Ross because it never seems like his rotation spot is ever secure. Sure, he has had some rough stretches where he has been knocked around, but overall I would say his short career has been no worse than average. Ringing endorsement, right? He has solid strikeout potential, and is on a team that should get him a good amount of run support more often than not. He needs to avoid the big inning because that’s where it seems he gets in trouble. All of that said, Ross is still worth a cautious add in 12 team leagues because he has the stuff to succeed.

Dinelson Lamet, SP, San Diego Padres. One of the Padres top ten prospects, Lamet has come in and pitched very well so far for the Padres. In two games he has struck out 16 batters over 10 innings and has collected two wins. Obviously this is a revelation as we know wins are hard to come by for Padres pitchers. He does have a real issue with walking batters, and he needs to find a consistent third pitch to really take off. But for now, Lamet is worth a look in 12 team leagues for the awesome strikeout potential and good start that he is off to.